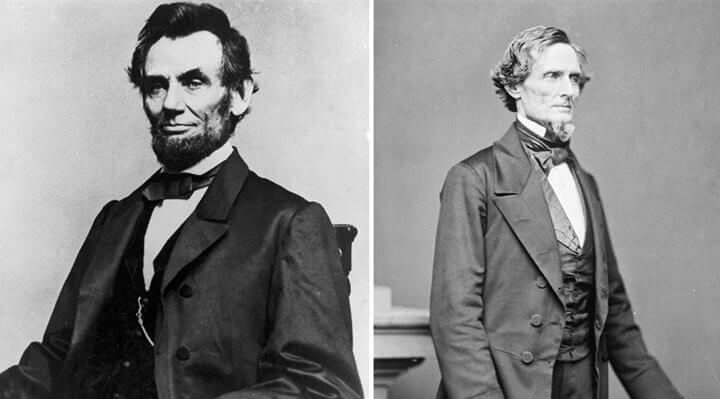 Even though from opposing sides in terms of ideas and governance, they used similar approaches to drive their point home ‘speeches.’ They both were presidents during Abraham Lincoln’s presidential tenure. How was that? Well, Lincoln was the elected president while Davis was the confederate president. Students get excited and ready to delve into history books to find out how this appears to be.

They are certainly the most talked-about individuals during the Lincoln era. They both have come out with different initiatives that require a spotlight. They both achieved greatness through different ways, a reason why they are still talked about to date. Did you know what Lincoln and Davis looked like?

Jefferson Davis was a pro when you compared him to Abraham Lincoln when it comes to experience in the military and politics. He was the confederate president, while Lincoln was the union’s head during his presidential tenure. However, Abraham was termed as the effective president even though he didn’t have much military experience; he had the experience of leading people.

Lincoln was born in 1809. Even though he was from a humble family, he succeeded against the odds and became a famous lawyer and statesman. He went into politics when he saw how stale slavery had been. He won his presidential election in 1861 and led the country during the civil war. He gave the Gettysburg speech and pronounced the emancipation proclamation.

Jefferson Davis was born in Kentucky in 1808. He came from a wealthy family. He was a famous politician and had a military background. During Abraham Lincoln’s presidential tenure, he was the confederate president from 1861 to 1865. He was a democratic and was the senate of Mississippi and in the house of Representatives. He had roots in the military, where he served as the secretary of war.

Who is Abraham Lincoln?

Born in Kentucky in 1809, Abraham Lincoln became the 16th president of the USA. His tenure will forever be on the books of history because; he abolished slavery, modernized the economy, preserving its union. Though he was from a poor background, he scaled through the ranks to become a famous lawyer and a statesman.

Abraham Lincoln taught himself by borrowing books and allowing other people to teach him. He retired from law practice after he was vexed by the degree of slavery in the country. He first ventures into politics by becoming a legislator and congressman of the US from Illinois State. And soon after this, he ran against Stephen Douglas to become the president. He was assassinated in the middle of a play by the actor John Wilkies.

Who is Jefferson Davis?

Jefferson Davis was born in Kentucky in 1808 in a mildly prosperous family household. He was the last born from a family of 10. Davis lived in Mississippi and moved to Louisiana. He was a famous politician and served the United States as the Confederate. Before focusing on his political career, he served in the military as a secretary of war after graduation from military school.

He was right at the center of the Mexican war, where they fought and won. He took interest and married Sarah Knox Taylor, a daughter to a future president of the US-Zachary Taylor. After three months of being married, they contracted malaria that Sarah failed to recover from. Davis lived to fight another day; when he was about 36, he remarried again and had six children.

To conclude, it is clear that these household names served the US diligently. It is no wonder that they are the most talked-about statement to date. Lincoln was the president of the entire nation and was also the head of the union, something that gave him a lot of popularity among his people.

On the other hand, Davis was the president of the confederate states and also served in the military. They came to power during the American Civil War. They are both from Kentucky and got married twice.

These two gentlemen stood out in different ways. They had goals and accomplishment that they had in mind and each one of them went through and made sure they achieved as many goals as possible. They played an important role in the American history and will never be forgotten.