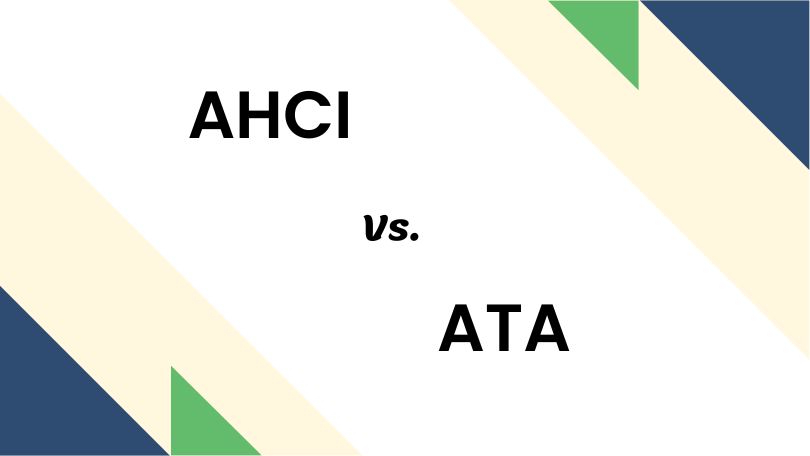 AT Attachment (ATA) is the standard design that has been there since time immemorial. It was created as an interface between storage units like hard drives and central processing units. It has stood the test of time while undergoing upgrades from time to time. They come in two types Parallel AT Attachment (PATA) and Serial AT Attachments (SATA).

Advanced Host Controller Interface (AHCI), on the other hand, was solely created with Serial ATA in mind. It’s a controller host interface that outlines how data is passed from the storage to the host.

Their distinguishing factor is pretty clear, ATA is a host controller while AHCI was designed as a controller interface for serial ATA. Serial ATA is an upgraded version of AT Attachment, as stated earlier.

Just like its name suggests, AHCI is a controller interface of the host. It outlines the actions and tasks of other host controllers for which they are designed for. Intel describes it as the required technical standards for outlining the operations.

On the other hand, AT Attachments is a host controller that outlines the route to which information passes from storage space and a host. It can also connect two storing devices. You will notice that the Advanced Technology Attachment is connected to a motherboard and also two hard drives components.

AHCI is a controller interface that will outline the actions of a host controller like Serial ATA. It has additional features like Hot-Plugging and NCQ. NCQ-Native Command Queuing functions by allowing the controller to change the order of receiving information from a certain data or output. It ensures the controller has a minimum of spins.

On the other side, hot plugging will allow the controller to effectively remove or add a hard drive without having to reboot the CPU. Here, your hard drive would just be like an ordinary memory card. These features are only compatible with the updated version of ATA. Since ATA and PATA are older versions, such features wouldn’t work on them.

If you desire such features on your entire system, but you have an older version of the host controller, the only choice you have is to change its host controller. Designers and developers use the device as a standard method for detecting and configuring a SATA adapter. It’s quite hard to implement because it only works with SATA.

Advanced Technology Attachment is a host controller that specializes in passing information from storage and host. It can also be referred to as an interface because it connects which storage devices should pass information to the host. The first device was created in 1986.

They come in two versions PATA-parallel AT Attachments and SATA- Serial ATA Attachments. SATA is the latest version and is compatible with AHCI. PATA (Parallel ATA) and ATA are acronyms that refer to one and the same thing.

SATA is not only compatible with AHCI; it is also operational in IDE- software that supports Serial ATA without AHCI. Advanced technology attachments are popular and among the cheapest interfaces to ever exist. There is backward compatibility in which you use an old version of ATA with a new version of the ATA interface. Advanced technology attachments are connected at the end of a motherboard and another at the end of a hard drive.

Difference between ATA and AHCI

ATA, on the other hand, was designed in 1986. There are two types, namely Parallel ATA and Serial ATA. All types of ATA are compatible with one another. AHCI is not compatible with ATA, so you will have to use it with other host controllers. But the latest version of SATA is compatible. ATA is simple and straightforward; therefore, you can easily implement it, while AHCI is complex and difficult to implement.