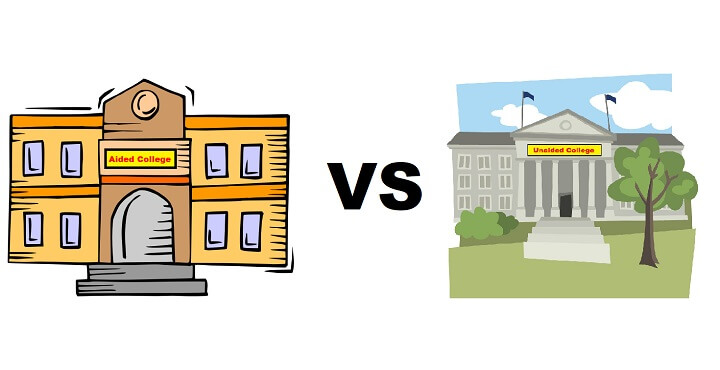 It is no surprise that the system of education has changed dramatically with time. Educational systems have been created and developed in different ways over history. As we experience the globalization of the education system, it’s easy to see that there is a need for many different types and styles in order to create an inclusive space. These include the aided and the unaided schools.

Aided schools and colleges are supported by the respective government of the country whereas unaided, or private universities have no involvement. In unaided colleges, professors and other professionals of the institution are remunerated by the management whereas in aided ones it’s all done through government channels.

The aided and the unaided colleges have different admission criteria. A government-backed college operates on merit, while an aided one may or may not do so depending on their policy guidelines for selection processes that are set by management themselves.

What are Aided Colleges?

The colleges that are supported by the respective government, often through financial aid and external resources like grants or scholarships; these colleges can be called “aided” schools. AIDED COLLEGES: receives funds from your local authority for both economical purposes as well as other forms of support such as advance tuitions to ease their students’ academic burden (ease).

There are a number of ways that colleges receive funds from the government. Some of these sources include grants for academic activity, infrastructure development, and maintenance as well as other needs on campus such as safe drinking water access in remote areas where most don’t have it yet!

The officials in a government-aided college are kept under strict supervision by their superiors, the higher authorities. They must follow rules set out for them and cannot do anything without permission from up top.

Candidates are chosen through a merit-based process. In addition, the standard qualifications required for each teacher and other professionals fixed by the government operate as a filter that screens out those who do not meet these standards prior to them even applying!

What are Unaided Colleges?

Unaided colleges are a unique type of educational institution that must raise their funds independently. They can do so through external sources, such as private firms or organizations, and rely on them for college academic activities and infrastructure development in addition to any other help they may need at some point during operation like financial aid from the government.

Unlike aided schools which receive funding every year because it’s part of an annual budget process with all levels being planned out ahead together (usually), un-aided institutions have no guaranteed source coming into their coffers – meaning what little money does come in will simply dwindle away unless something drastic occurs first!

If the fees in an unaided college are too high, it can be difficult for students. These colleges do not follow any boundaries or restrictions set by the government and they charge according to themselves which may seem like a bad idea because of how many facilities are provided but this is more than what’s given at aided schools.

Unaided colleges are autonomous as these colleges do not have any liability, can act freely, and are not answerable to anyone. In an unaided college, teachers become rich due to high remuneration from management that takes care of the recruitment process.

Despite the occasional case of unfairness or bias in an admission process, most unaided colleges base their decision on merit.

Difference Between Aided and Unaided Colleges

Aided colleges are entitled to receive government funding and support whereas unaided colleges have no such benefits.

The professor’s salary in a government-funded college is decided by the ministry of education, which means that it can vary from one campus to another. However, this does not happen with colleges run solely on private funding where professors are remunerated according to contract terms set out between them and their university administration (or board).

The fees in the aided colleges are set by the government, so you know that they’re within reasonable boundaries. But with unaided schools, it’s quite different because there isn’t any regulation on how much students have to pay for their education.

The criteria for admission are set by the government and they can include either merit-based or management-based. But in unaided colleges, there is no such thing as an interview so it’s up to you whether your child gets into these schools with their qualifications alone!

In order to recruit new faculty, a college must be aided by the government. This means that they have set criteria for which positions are available and what kind of person can apply in these openings. In contrast, colleges without funding from this office will depend on their own hiring practices.

Aided and unaided colleges operate in different ways. Aided ones are managed by the government while autonomous private institutions exist for profit-making organizations or associations

The professors and other professionals working receive protection from the government in all of their endeavors, but what about unaided colleges? They do not have any kind of privilege.

For years, the primary education system was a one-size-fits-all approach. But in more recent times it has become necessary to make distinctions between different types of schools; this includes both private and public institutions – Aided or Unaided College? These educational systems can be distinguished under the categories of funds, fees, and facilities. These differences result in setting criteria for how these institutions operate which is also known as their autonomy.

Aided colleges are those that get funding and support from the government. They operate on basic principles set by law, which means they have similar admission processes as well as recruitment standards under criteria determined in advance of time (i.e., before your application).

The respective management of the unaided colleges often sets biased admission criteria and unfair recruitment processes. The government does not fund or support these institutions, so they must rely on donations from different organizations for financial assistance in running their day-to-day operations such as paying teachers’ salaries with fewer resources than what would be ideal according to demand.