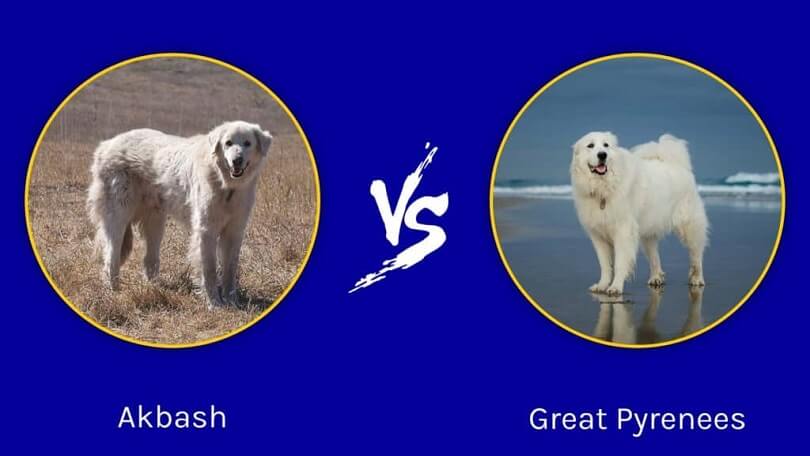 Dogs are believed to be man’s best friend. They are loved and adored by almost everyone. Dogs were the first animals to be domesticated as its species evolved from wolves between 27000 to 40000 years ago. There are wild and domestic dogs. Both types come from the wolf ancestors, which make them a subspecies of wolves.

Most people can’t differentiate one from the other species: Akbash and Great Pyrenees. But they have various distinguishing factors that set them apart. Read along to have a better understanding of the differences and similarities that both of these two dog species has to offer.

The first Akbash dog was seen at around 1000 BC and was found in Turkey. They became popular in the 70s after they were introduced in North America. Their unique features made it easy to tame them to become guardian’s dog.

An average Akbash dog weighs between 41-64kgs, with a height of 71-78kgs. This breed of dogs can live up to 10 to 12 years. But this will be dependent on how well they are taken care of. If they are well taken care of, they can beat this record of living to the utmost 12 years.

They usually don’t have any health concerns but it’s important that you put the necessary measures by ensuring they visit the vet on a regular basis for checkups. . Other popular names of Akbash include, AkbasCobanKopegi or CobanKopegi.

What is Great Pyrenees

The Great Pyrenees is an attractive and beautiful species. And it is for this reason that it is the most adored dog species. At first glance, you will notice the canine’s white fur, which is very inviting. The furry coat can be wavy or straight. The Great Pyrenees has various colors, some have cream furs, and others have white furs or grey furs.

On average, the weight of a Great Pyrenees dog is between 45-54kgs, while the height is around 70 to 82 centimeters. Great Pyrenees are said to be level headed and intelligent, a reason why training and taming them is quite difficult. But with practice, anything is possible, plus training is inevitable due to their enormous size.

They bark quite often, and this makes them a perfect candidate to be a watchdog. They get along with other animals and humans just fine, so you wouldn’t have to worry about your pet being hostile to family members and pets. The lifespan of the Great Pyrenees is between nine to eleven years with an extension if properly taken care off.

Difference between Akbash and Great Pyrenees

Dogs are loved by humans; you can’t reiterate how much in words. Most people love them because they are known to be loyal to their pet parent. They were the first animals to be tamed by humans. There are various tons of breeds among them is Akbash and Great Pyrenees. They are the same in appearance but have different characteristics and features. You must also take great care when it comes to shading especially with Great Pyrenees as this dog species normally shade a lot.

Akbash originally came from turkey in 1000BC whereas originally came from Spain in 3000BC. However, it’s important to ensure that you offer the best care to these two dog species if you decide to domesticate them. This includes proper feeding by identifying the right dog biscuits and the right vaccination. This will go a long way in ensuring they in turn provide the best companionship and protection.