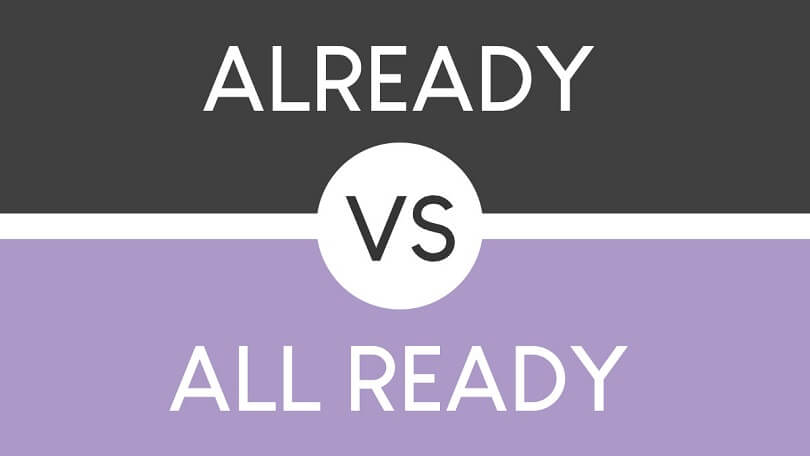 When crafting a sentence, we may come across similar-sounding words. Since their spelling and pronunciation appear to be identical, how should we differentiate between them? There are a plethora of such words in the English language.

Most people are baffled by the difference between ‘All Ready’ and ‘Already,’ and so they use the wrong one in their writing. Although they appear to be similar, they are not the same; they each have their own distinct connotations.

The word “Already” means nothing more than “prior to the present time” in everyday parlance. However, if we use the phrase ‘All Ready,’ we mean that something is completely prepared and ready to go.

Despite the fact that the two words sound and spell the same, they have entirely different connotations and cannot be used interchangeably. To construct a flawless sentence, we must know when and where to use each one.

Already Vs. All Ready

As a rule, “Already” implies that something has already been done, but “All Ready” implies that everything or everyone is prepared for something.. All ready may be used in any statement, whether it’s a positive or interrogative one.

As a starting point, here are some examples: I’m all set for the dancing performance.

If you’d want to better understand these two words, glance through the table and information below.

What does it mean Already?

WordNet defines already as “before a stated or inferred time,” according to this definition. Something has already been done or achieved in the past or previous to the date in question.

When we say something has already occurred or has already happened before the time we’re referring to, we’re using the preposition already. Indicating the existence of a problem now or at a period sooner than anticipated.

“Already” may also be used to emphasize a point. You’re done with something when you say “Already,” in basic terms. To better understand how we utilize the word “Already” in a phrase, we’ll examine a few instances below.

What does it mean All Ready?

‘All Ready’ is not a single word, but rather a combination of two words – ‘All’ and ‘Ready’ – used together. That is to say, everything is prepared, ready, and able to go. All it does is provide a clearer picture of what it means when we say “Ready” and how serious we are about being ready.

It might be used in place of’ready’ in order to emphasize a statement in speech or writing. ‘All ready’ may really be replaced with’ready’ in a statement without much of an impact on its meaning. Here’s an example: “I’m ready to go on the vacation!”.

The altered phrase will read, “I’m ready for the trip” if you substitute ‘all ready’ with’ready’. However, as you can see, the statement’s content is same, but the emphasis on preparation is reduced in the second sentence.

In addition, when you utter both statements, you will feel more enthusiastic about the first one than the second. To better understand how to utilize ‘all ready’ in sentences, let’s take a closer look at some examples.

As an example, here are a few:

Difference Between Already and All Ready

The word “already” is not an adverb, although “all ready” is.

Currently, the event has already taken place. While on the other side, being fully set means that you are prepared for anything comes your way.

As of now, it is only one word. While already are two distinct terms used together, they are not used as a single term.

Even if you are ready to go, the phrase “already” has nothing to do with the actual sense of the word. All ready, on the other hand, conveys a sense of completeness and focuses on the literal meaning of the word “ready.”

Concerning Already and All Ready, Some Frequently Asked Questions

What’s the term for it yet?

Even though the terms “all ready” and “totally ready” are distinct, they are often used in the same sentence to indicate the same meaning. “Ready” is a definite noun.

The preposition all is used before the verb ready in order to draw attention to the term.

If you put them together, you get the idea of being fully prepared. Individuals, groups, and even the general public may benefit from their utilization.

What does “all ready” mean in a sentence?

All ready may be used in a variety of ways in a sentence. The two terms are often used in conjunction to inquire as to whether or not someone or something is fully prepared.

Some sentences that use the phrase “all ready” include the following:

It is a genuine term, isn’t it?

As far as I’m aware, already is a term. By “already,” we mean “previously” or “so soon.” If anything happened before to a specified date or time, it is an adverb, and it is used to indicate that it happened as recently as right now.

To put it simply, it means ‘by this time’ or ‘by the period specified.

Here are a few real-world examples to help you grasp the concept:

What are you already using?

The adverb “already” emphasizes the notion that something has already been done or occurred before another event occurs. It is often used in conjunction with the perfect or past tense.

we requested Tony to join us at the fair but he had been there before; we were disappointed. Please don’t keep asking the same question; I’ve already informed him of the answer. When we got to the cinema, the movie had already started.

Are you already thinking about getting married, or are you waiting for the right time? I’m already stuffed after only one piece of pizza.

Formal communication is the norm in the workplace. Which is why it’s so tough to decide between the words “already” and “all ready” when writing. As a result, it becomes difficult to achieve success in the communication process.

To be effective and beautiful, communication can only be accomplished when we know how. When? Is there a certain location in mind? What is the correct term to use? to increase the depth and clarity of the message conveyed and the ease with which it may be understood.

Even though they sound and spell alike, their meanings couldn’t be more different. Whereas Already depicts something that has already occurred, All Ready depicts a state of preparation in anticipation of something that will take place in the future. To say something is already done is to say that it has been fully or entirely prepared for the topic at hand.

The word “already” is a noun, not a verb. All Ready is not a single word; instead, we combine all with ready as a way of emphasizing the statement. Already and All Ready are now interchangeable, which should put an end to any uncertainty. As a result, we have a better understanding of how and when these two words might be utilized in various statements or discussions.

As a result, your written communication will be considerably more successful if you use these terms in a creative and competent manner.) much more effective.