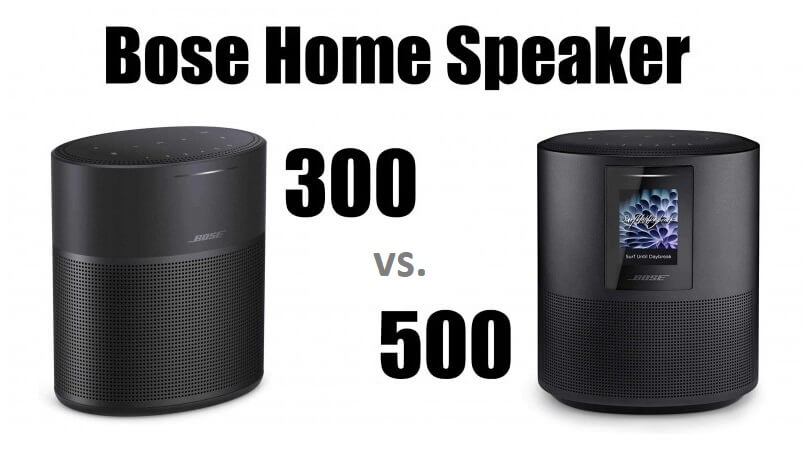 If there is something that can bring people together, it is music. There are many things that people enjoy listening to, and those who have the same preference instantly share an unspoken bond between them. Bose is at the top of the list of companies in terms of popularity and quality when it comes to music equipment.

The top speakers from this particular brand are the Bose Speaker 300 and 500, which are two completely different speakers. Before deciding on which one you should buy, you need to learn more about them, and below are some of the information you will find useful.

When it comes to learning the differences between the two, you need to look at the quality of the sound they produce, the design, and their performance. The difference between the two would be the number of their microphones, their weight, dimensions, and the colors they come in.

This speaker is good if you are looking for one with a good quality base and amazing sound quality. It is compact, making it easy for you to bring it around. The speaker is enabled with different voice assistants such as Google Assistant and Alexa, so you can command it easily through speaking to it. Besides music, it would also update the weather and news. It boasts six microphones that make its sound quality superb.

In terms of pricing, you can find it in the low-price range, which makes it affordable if you are interested in it. It also comes in two colors: triple black and luxe silver, so you can choose which one feels better for you.

The Bose Speaker 500 is a great speaker with an LED screen that displays useful information. You can never go wrong with this if you are more into acoustic performances since its superb sound quality. You will be able to enable it by using the same voice assistants with the Bose 300. It has eight quality microphones and does not have a battery, so you will need to have it plugged in. It has Bluetooth connectivity, so you can easily sync it with your device.

In terms of pricing, it is a little higher than the Bose 300, so you might need to prepare for it. It also comes in two colors: triple black and luxe silver.

Difference between Bose 300 and Bose 500

There are certainly a lot of differences between the Bose 300 and the Bose 500 despite being from the same brand. As much as they are similar in some sense, they come in many differences, and below are some that you would find to be helpful.

These speakers are at the top of their game when it comes to the Bose brand. You will see that they are the best out there when compared to other lines, and they live up to their name of being innovative. You will be able to choose which one to get by looking at the information provided above.

If you are looking for a speaker that has a screen, then the Bose speaker 500 is the way to go. However, if you want something that is lower in terms of price but still has great aspects, then you might want to consider getting the Bose speaker 300.