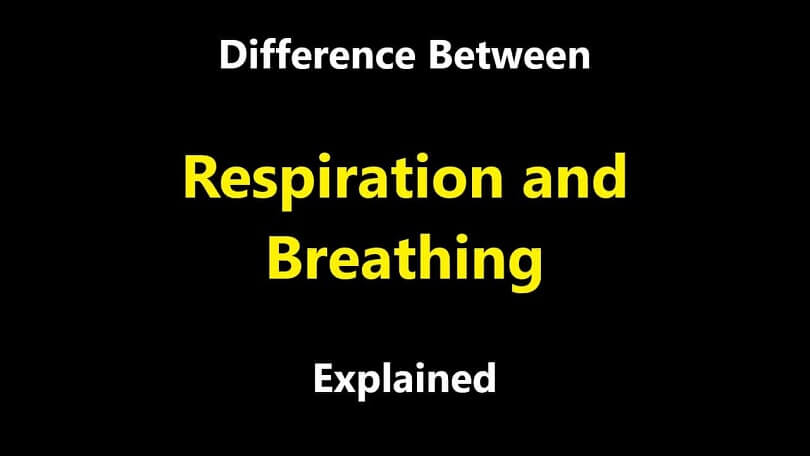 This is a common misunderstanding, owing to the fact that the same organs, such as the lungs, nose, and mouth, are involved in both breathing and respiration. Because they both have to do with our body’s utilization and intake of oxygen, we tend to lump them together. They are, in fact, rather different.

Breathing and respiration serve different purposes. Breathing is the process through which humans take in oxygen and expel carbon dioxide via the nose and mouth. Respiration, on the other hand, is a chemical process. Glucose is broken down by the body’s oxygen during breathing.

Every day, we can get things done by breathing. When we breathe, our organs are in good working order.

Breathing is the exchange of gases between the cells of a living organism and the surrounding environment. You breathe by taking in oxygen and exhaling carbon dioxide via your lungs.

There is an inhalation and an exhalation owing to the contraction and relaxation of the muscles, respectively. A person’s mouth, nose, and lungs all play an important role in the process of inhaling and exhaling air.

The diaphragm relaxes during the exhale of carbon dioxide, which causes the thoracic cavity to shrink.

The lungs contract as a result of the increased internal pressure, causing the air to be expelled from the body.

We contract our lungs when inhaling, which causes the ribcage to rise and expand.

This causes the lungs to expand, allowing us to inhale via the nose and mouth. The air then enters the lungs through the windpipe.

Eupnoea, diaphragmatic, hyperpnea, and costal breathing are all forms of breathing.

Slow breathing is the sort of breathing that is described like this. Resting is when it occurs. It’s not something you can control.

When there is a dearth of oxygen in the body, this sort of breathing happens. After a strenuous exercise, for example, you may find yourself struggling to breathe.

A contraction of the diaphragm causes this sort of breathing to occur. The chest does not move while breathing; rather, the belly conducts the work. Abdominal action is clearly obvious.

The ribcage is utilized for both inhalation and exhalation in costal breathing.

You breathe in oxygen and expel carbon dioxide and other gases via respiration, which is also known as gas exchange.

In order to generate energy, oxygen is needed in the breakdown of glucose.

The cells and tissues of the body then employ this energy to carry out the critical activities of the organs and our entire body.

Cells develop and repair themselves with the aid of the energy generated during breathing.

Difference Between Breathing and Respiration

Even though they are two distinct activities, both are necessary for a live organism’s existence in some way.