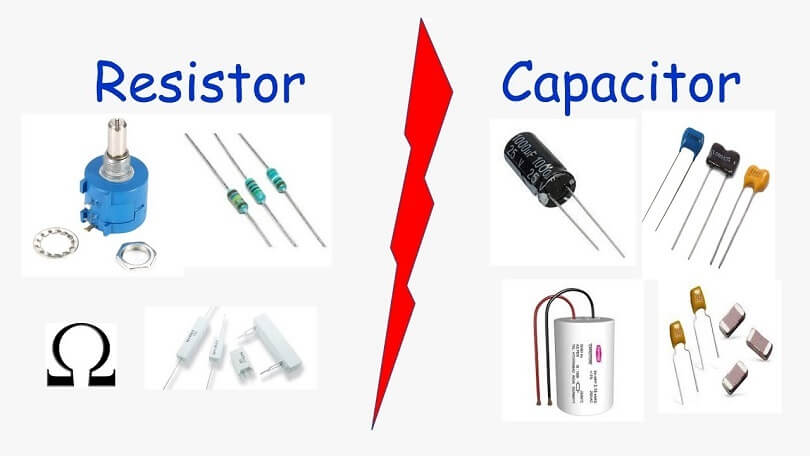 A circuit is made up of many different components, and thus, it is important to learn more about them. An electric circuit’s two important passive parts are the capacitor and resistor. Both of them behave differently in a circuit, and that is why getting to know them better is essential in making your own circuit.

The main difference between a capacitor and a resistor would be that a capacitor stores electric current while a resistor blocks the current flow. To put it simply, capacitors can keep the electrical charge inside of it for a short period of time while the resistors can block the current flow of the circuit. They are the complete opposite of each other in a sense.

When you connect a capacitor to a circuit, the flow of electrons is not able to pass through because the DC circuit has an insulating layer, and thus, it is stored in the form of charge through the wires. On the other side, when connected to a circuit, the resistor would absorb the current flowing on the wires and would dissipate them through the form of heat. The tolerance of a resistor would depend on the band located on its body.

A gold tolerance band would be 5% tolerance, the silver tolerance band would be 10%, and if there is no band on it, that would mean 20% tolerance. The main purpose of a resistor is to limit the flow of electric current within a circuit. On the other side, a capacitor is composed of terminals that have specific voltage values that are either positive or negative, and they are the one that determines if a capacitor has polarity or not.

What is a Capacitor?

A capacitor is a component of an electrical circuit that can store energy in the form of electrical charges and produce a potential difference across the plate. There are a lot of different sizes of capacitors depending on the need for it. However, it is usually very small when used in resonance circuits. It consists of two parallel metal plates that are spaced electrically. It also passes alternating current without passing any direct current. It is an important part of any electronic equipment. The polarity of a capacitor is consisted of different terminals and can be positive or negative. The type of terminal classification is something that can determine whether or not the capacitor has a polarity or not.

What is a Resistor?

A resistor is also an important component of the electrical circuit. It restricts as well as blocks the flow of electricity through the circuit. The resistance is normally measured through the energy that the resistor can block. It also contributes to limiting the charging rate of a capacitor in adjusting frequency response, and it also acts as a voltage divider.

The power rating of a resistor is easily measured in Watts and is normally from 0.125W to 1W. Resistors that has a power rating greater than 1 W is called power resistor. The resistor has its own tolerance, which is the percent error of the resistance of the resistor. This is easily measured through the band color that it has. The gold tolerance is at 5%; the silver is 10%, while those that have no bands have 20% tolerance. Resistors have no polarity, and this is because the conductive current flows in both directions. The device is normally installed in the same direction.

Difference between Capacitor and Resistor

Capacitors and resistors are important in an electric circuit, and they make the circuit work. They have different functions and features, and they both have different classifications, but it is important to have them in a circuit for it to work properly.