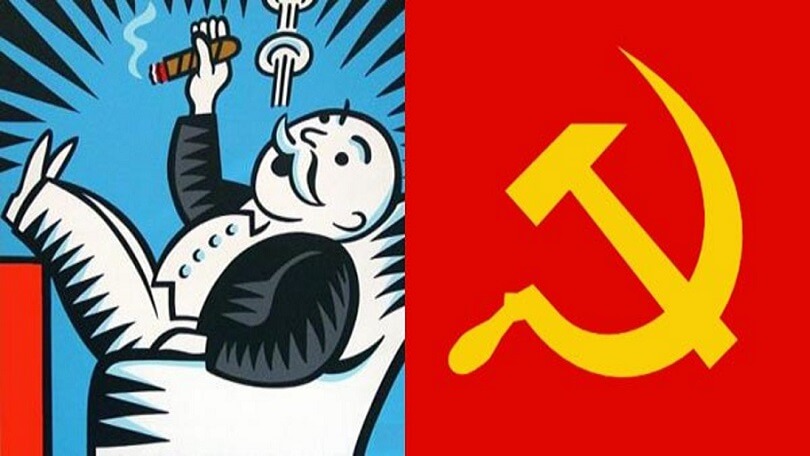 Assets and businesses are private property in the capitalist economy. Income, wealth, pricing, and the distribution of products are all determined by the free market. But government action to redistribute resources equitably and effectively is a hallmark of the Communism economic system in contrast.

For profit, private entities own and control the means of production in a capitalist economy. Enterprise, natural production, capital goods and labor make up the four components.

Business owners and workers may make their own financial decisions under this economic framework.

Taxation and normal regulatory rules are the only government interventions in this system. Businesses and their workers are free to spend their money as they see fit, and the government has no say in it.

There are two aspects to capitalist ownership: control of the elements of production and the ability to generate money from the ownership of those factors.

In addition to allowing them to run their businesses more effectively, this also provides them with the motivation to maximize their earnings.

Because of capitalism, the finest things are sold at the best prices. Consumers are prepared to spend more for what they desire the most, which is why this is the case.

As a result of this, firms are always striving to provide the most profitable items possible.

By abolishing private property, communism is a system of economics that claims to be able to achieve perfect social equality.

In this country, the government controls most of the factors of production and determines how resources are allocated and what goods and services are offered.

Karl Marx and Frederick Engels came up with the idea of communism in the 1840s.The following ten points are outlined in the Communist Manifesto:

For the communist economic system, everyone gets exactly what they need. Healthcare, education, and other services are provided at no cost. It also aims to boost economic development, ensure national security, and keep infrastructure in good shape.

Massive economic resources can be swiftly mobilized, projects can be executed fast and industrial power can be created quickly under communism. It is able to move successfully because it subordinates the wellbeing of the general population to the achievement of social objectives at the expense of individual interests.

Difference Between Capitalism and Communism

The economic purposes of capitalism and communism vary, for example:

Capitalism does not care about the distribution of wealth. It is of the opinion that economic growth and innovation cannot occur without inequality.

Profit motives under capitalism encourage businesses to improve their efficiency. In order to meet the demands of the public, it reduced expenses and created new items.

If a company fails to keep up in this economic structure, it will be forced out of business. A company’s demise, on the other hand, permits resources to move into new or more efficient sectors of the economy.

The absence of actual incentives for employees and management to decrease expenses under a communist system typically leads to inefficiency.

Often, the government or state is in charge of determining who gets a job in a communist society. As a result, they are able to hire individuals who are unable to do any critical tasks.

Limitations on the Cost

Capitalism relies on free markets to set prices. Price gouging is a possibility for monopoly-holding companies, which might take use of their advantages and extort customers. A communist economy is characterized by artificially low prices established by the state.

What were the origins of capitalism?

The rise of the merchant class in the 17th century marked the beginning of capitalism. These merchants did more than just commerce; they also produced a wide range of goods.

Workers and laborers were paid a regular rate for doing production tasks, and all the necessary raw materials were provided by them. As a result, capitalism was born.

What are capitalism’s five most distinguishing features?

As a result, businesses are increasingly turning to advanced technology and automated systems in order to produce high-quality goods, which in turn generates more income and profit.

It is a political philosophy, then, isn’t it?

Several political parties have adopted capitalism as a social philosophy.

As a result, several nations, including the United States, Germany, Canada, the United Kingdom, and Chile, are ruled by parties that support the capitalist economic system.

What is Communism’s ultimate goal?

The primary objective of communism is the establishment of a society devoid of class distinctions, administered only by the people themselves.

It is the essential idea of communism that it aspires to empower the working class by transferring all ownership privileges now held by the bourgeoisie to the majority of its members.

Which year was it that China became a Communist country?

With the establishment of the People’s Republic of China on October 1, 1949, under the leadership of Mao Zedong, China became a communist state.

Trade and industry are fundamental to both capitalism and communism, which both discuss the ownership of property. Capitalism and Communism are like coins in that they each have two sides.

In Capitalism, the distribution of wealth is skewed, resulting in the wealthy becoming more opulent and the poor becoming poorer. While money is distributed equally under Communism, individuals are unable to own their own property.