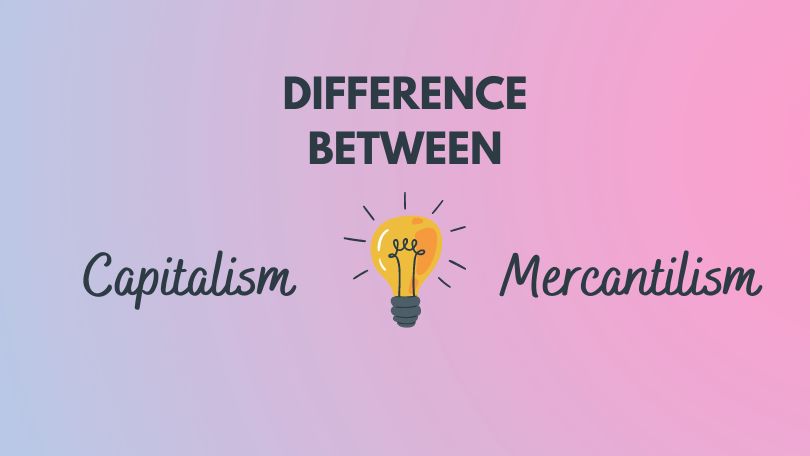 When talking about capitalism and mercantilism, it is important to consider how it affects the present-day system. The businesses should be considered and check who goes by the mercantilist principles and capitalistic ones. Both economic systems have a common objective of generating profit, but mercantilism is the earlier form of capitalism. They have many similarities, so people can easily confuse them, but they are quite different.

The main difference between the two is that capitalism refers to an economic system’s liberty to do what they want. The members of society have equal rights to produce wealth from the open market, and the government has little to no interference. This is why it is mostly centered on businessmen making money from the members of society.

On the other side, mercantilism is a little different as it refers to the economic system that has restrictions. They insist on ensuring that the proper administration is done so that individuals are restrained from chasing any self-centered intention of accumulating wealth. Instead, they must do things to help the state and enhance the nation.

Capitalism is a state where the economic system aims to enhance the economy by looking into the efforts of every member of the state as figures that generate wealth. The main reason behind this system is that it acknowledges that individuals have a competitive nature. Thus, they tend to improve their abilities to increase their profitability, and thus this contributes to the heightened economic prosperity of the country.

Mercantilism, on the other side, is where the aim is enhancing power and wealth through the aggregation of gold, through the policies that are compatible with the country and focuses on exporting goods as well as services to other nations so that the country’s treasury is going to get more wealth. The system wants to minimize the imports of products.

Capitalism is a practice where the private sector of a state has ownership of the capital goods as well as profits. Capitalism started way back in Europe and was born from feudalism and mercantilism. It adds characteristics such as capital accumulation, a price system, wage labor, and the like. The market economy is based mostly on the demand and supply of the services and goods that are produced.

In an economy with a capitalist market, the investments and decisions made are dependent on the production ability and the wealth of financial markets. Laissez-faire capitalism or the free market is a good example of capitalism. Basically, all private entities decide what type of item they want to produce, sell or where they invest in. They are also the one that prices their items. Pure capitalism is also seen in a mixed environment.

Most countries nowadays practice mixed capitalism, which incorporates the private ownership of capitalists together with government regulations depending on the business or industry they are in. An easy-to-spot benefit of capitalism is that it easily helps to resolve issues that are related to the distribution of resources as well as economic production.

Mercantilism, like capitalism, is another economic system. It deals with the exports and imports of a specific country. Mercantilism has been around Europe since the 16th century, and it is simply based on the system where the wealth of the world is pretty static, and the majority of European countries are those that earn the largest share of the wealth that is gotten through maximizing exports and minimizing imports through the help of tariffs or taxes.

Exports are sent to other countries with the purpose of making the host country richer since it easily brings cash into the economy. Imports, on the other side, tend to enrich other competitors at the expense of the economy. Mercantilism is known to promote tariffs as well as subsidies on specific traded goods.

The main goal of mercantilism is to reduce any deposits and reach a zero surplus. It makes use of a zero to zero transaction where exporters will have better benefits and advantages.

Mercantilism is a system where the nation that uses it wins while the other loses. It is an economy where imported goods have very high tariff rates. And though a lot fewer people are figuring out why it is less popular these days, it is mostly because of the high tariff rates and not being able to earn enough for keeping.

Difference between Capitalism and Mercantilism

While one might assume that mercantilism and capitalism are the same, they are very different. This is because capitalism mostly focuses on the business and how it is going to benefit only private companies. On the other side, mercantilism would be more focused on the benefit of the country and figure out how to control the import of items without having to worry about it.