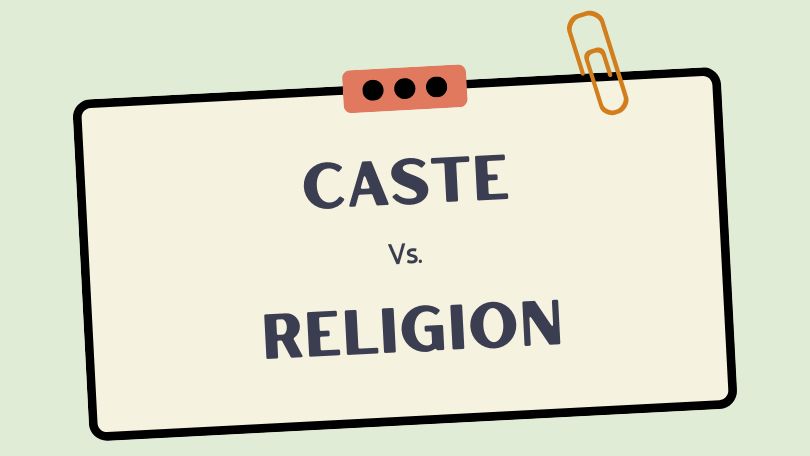 Every person in the world belongs to a particular sector, be it a caste or a religion. In a country like India, where people live with a caste system, it is more obvious with them. However, people’s religion is another thing that most would be judged for.

Many people get confused between what a caste and religion are, and that is why there is a need to define them further. Caste, also called Jāti in the Hindi language, simply means hereditary transmission. Through this, a person’s caste is decided. This includes a lot of things, including ritual status as well as occupation.

On the other side, religion believes and worship of a god. It is a practice of the social-cultural system. It includes many things, including worshipping places, morals, social practices, and anything else related to the human’s spirituality.

The main difference between a caste and religion would be that caste refers to the physical world’s social structures. In contrast, religion explains what cannot be seen with the eyes, faith, which lies in the metaphysical world. This is the main point that would set the two terms apart.

Caste is something that you are born into, while religion is taught, there is nothing you can do about the caste where you belong, but religion would be of your free will. Your caste dictates many things, including what you would work as, who you interact with, and more. On the other side, your religion is your choice, what you want to believe in and how you want to exercise it would be all up to you. The practices that your religion can be done by you or not; it is of your free will, while the caste system is more dictative of the terms and rules that it has.

In the caste system, every person is classified depending on their status, their income, and more. You will be able to find a lot of different types of caste within India, and they play an important role in the lives of its citizens. People are differentiated by their castes, which has been long done since before.

Every person is assigned a caste from their birth, and they cannot be changed because it is a place where they belong. This particular caste they are in would be their history and background. All of their judgments will be based on the caste level.

It may seem unfair but judging someone because of their caste is not unheard of. People will always assume that when a person is from the lower hierarchy of the caste system, the person will always be of the poor class. However, the government has taken some steps to encourage the people on the lower castes by lowering the examination cut-offs for the lower castes and putting higher cut-offs for the higher caste people.

Indian society is divided into four major categories: Brahmins, the Vaishyas, the Shudras, and the Kshatriyas. The Brahmins have the highest status, and they rank high in society. This can easily be equated to the queens and kings of that country with a monarchy.

The lower caste would include the servant or often called the untouchables, as they are not allowed to do many things that the Brahmins can do. For example, Brahmins consider it a sin to look at them and would quickly take a bath when they do.

However, with the quick development in the world, there are no longer just four castes in India but rather 5000 different ones, all based on the different traditions and social statues there. Not just in India, but other caste systems can be found in other countries such as Africa, China, Japan, and Nepal.

The history of the caste system is difficult to digest, and while it may seem unfair, it has a h2hold with the people, especially those of high ranks, which is why it remains until this day.

On the other side, religion is very different from castes. Religion is the belief in something metaphysical, which cannot be seen with the eyes. Religion is the worship of a higher being or a god. It is a social-cultural system where people get their morals from holy practices, ethics, and more. Most religions believe in the afterlife, and they have different concepts.

Religion distinguishes a person’s prayer habits, practices, traditions, and lifestyle. There are more than a thousand religions all over the world, and the biggest of them would include Islam, Buddhism, and Hinduism. They have different practices, but their goal would be to achieve self-preservation. They have different ways of worship and books that they use to serve as a guide for them.

Difference between Caste and Religion

Caste and religion are things that would always be included when a society is built, and they are bound to last a long time. There are different caste systems and religions in different places, but they are linked with the culture and tradition within them. Every caste system and every religion in the world wants nothing but peace and order within the society.