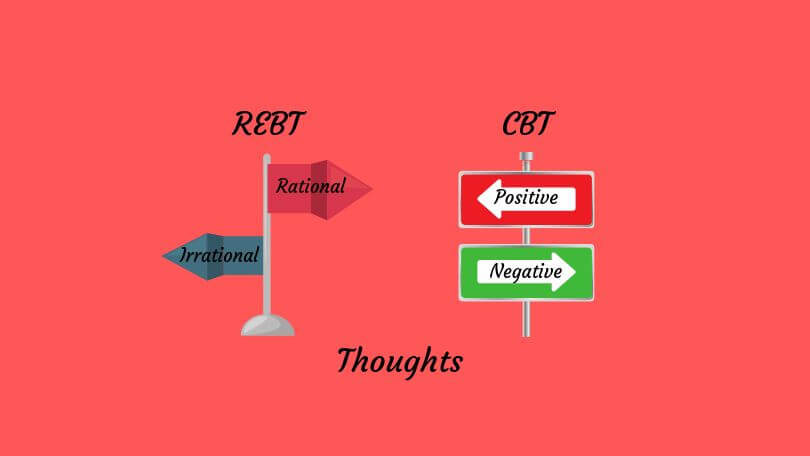 Cognitive-behavioral therapy (CBT) and rational emotive behavior therapy (REBT) both help people who struggle with mental health and behavioral problems. They are designed to help people achieve a healthy mind and body, but they work differently, with different methods, to achieve that goal.

CBT and REBT are two similar methods of treatment. However, the difference between them is that CBT focuses on changing the current behavior of someone, and REBT targets the negative and lethal beliefs of a person. CBT is a vast method that draws from REBT, and REBT is one particular method.

Cognitive Behavior Therapy (CBT) is a treatment for anxiety disorders. It is used to change your thought patterns so you are less likely to engage in the behaviors that are causing your anxiety.

Rational Emotive Behavioral Therapy (REBT) is a type of psychotherapy that focuses on the mind. This therapy helps to see the world and life in a new light. It teaches one to accept themselves and others unconditionally. This enables one to abandon toxic thoughts and impressions.

Comparison Table Between CBT and REBT

What is the CBT?

Cognitive Behavioral Therapy (CBT) is a very useful tool that can be used to treat many different types of mental health issues. It has become a very common tool for treating depression and anxiety disorders. These two conditions are now so common, they’ve actually eclipsed the usage of other, more conventional therapies.

CBT is a mental health therapy that helps to deal with mental illness and mental health issues. It makes clear what is causing the problem, and then it offers a solution for that problem. It is used for the overall improvement of the individual’s mental and emotional well-being.

REBT or Rational Emotive Behavior Therapy was developed by an American psychologist called Albert Ellis in 1955. According to Ellis, there is a difference between a person’s notion about him/herself and the real self. People with irrational beliefs often behave irrationally and vice versa. And the environment and surroundings are important for one’s opinion and beliefs. So if a person has a negative belief, then that person cannot have a healthy life.

For mental health, the REBT method takes up a philosophical angle. It uses an approach called ABC Model, which negates irrational beliefs. It is a method of therapy, which is capable of encouraging someone to win over their challenging situation.

REBT is one of the best ways of treating the mind and emotions. It can help resolve many types of self-esteem problems, including suicidal tendencies, anger management, panic attacks, sexual abuse, and childhood traumas. Case studies of people dealing with those issues show the positive outcomes of this therapy.

Difference Between CBT and REBT

Cognitive Behavioral Therapy (CBT) improves a person’s self-image by teaching the person to be less critical of himself and to change the way he thinks about his shortcomings. Rational Emotive Behavioral Therapy (REBT) teaches the person to appreciate his positive attributes, and focuses on changing the way he thinks and feels about a situation rather than changing the situation itself. Both the therapies have been proven to be effective and helpful.