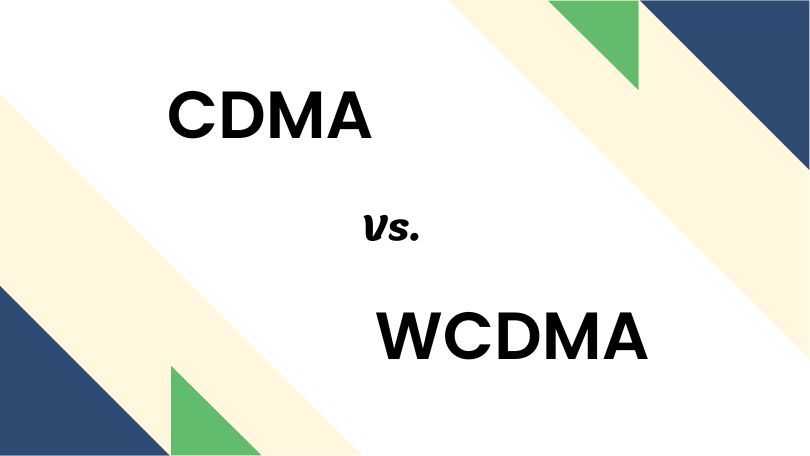 Communication devices were invented long ago and continuously improved over the years. These days, we have radios, mobile phones, computers, and a whole lot more. Because of the internet, most of the devices we have can easily access what we need. We can connect using our different devices such as tablets, phones, computers, and even TVs, basically anything. But, it is also important to know more about how network communication works. How can they function the way they do, and what are they all about?

CDMA means code division multiple access, and it is an algorithm that helps users capture the number of channels they would be able to use within the same bandwidth. In simpler terms, it helps to make your connection better by accommodating more users within the MHz of the bandwidth.

On the other side, WCDMA stands for wideband code division multiple access, and it has the same technology as CDMA, although the difference is that it incorporates it to 3G. Works with EDGE and GSM are used as UMTS, resulting in faster internet speed.

With everything transitioning online, having a good internet speed is no longer an advantage but a necessity. This is why it is important to know more about how it works and learn about it.

What is a CDMA?

CDMA means code division multiple access, and it is an algorithm that helps a sure to capture several different channels that can be used in the same bandwidth. It helps make the connection better by allowing more users per MHz of the bandwidth. CMDA multiplexes different signals to be fitted in just a single bandwidth.

It operates in an ultra-high frequency region around 800MHz to 2GHz. It has less interference because of hand-off features and also gives better coverage. It needs fewer antenna sites and consumes less power. It also provides better security than GSM technology due to its built-in encryption. It uses the spread spectrum for its data transmission.

In CDMA, a customer will have access to the network for the entire duration without having unnecessary interruptions. You should not confuse it with frequency multiplexing. The main reason why this algorithm is popular is that it gives every user their own unique identity, which easily helps to identify between two different customers.

Working the CDMA can be quite complex as it can easily allow about 61 users at the same time and fit them within 1.23 MHz. There are also different codes to help the algorithm between the calls and the theoretical limits. However, in real-time applications, because of technical limitations and quality purposes, the real number is normally less than 61.

CDMA has a lot of different advantages but also comes with disadvantages. The main advantage of using CDMA would be that usage of rake receivers can help in improving things. Usage of flexible transfer also helps to switch mobile stations without changing the operator. Meanwhile, the disadvantage would be that CDMA can include some delays because of the large code size; the requirement of precise time synchronization and the gradual transfer would saturate the radio capacity.

What is a WCDMA?

On the other side, WCDMA stands for Wideband Code Division Multiple Access, and it uses the same technology as CDMA but incorporates it into the 3G network. It works with EDGE and GSM so that it can be used as UMTS, and this results in a faster internet network speed/

WCDMA signifies the jump from 2G to 3G and how far the difference between them is, and it is because of a particular reason. CDMA is a competitor of GSM, and thus, it did not incorporate technologies that would help it be h2er and faster. On the other side, since WCDMA incorporates GSM and EDGE, it led to the UMTS. This resulted in better capacity, better speed, and better connectivity

WCDMA supports a very large variety of technological connectivity, including 3G&lt; MMS, text, and cellular voice. It helps develop DS-CDMA or the direct sequence code division method to channel access method, which is a frequency division duplexing. This helps to get to better connectivity and higher internet network speed.

WCDMA has two modes which are the FDD and the TDD. The FDD stands for frequency division duplex, and it is a method that separates users through their software and hardware. The code frequencies differentiate them, and they are of two frequencies: the uplink and the downlink. The TDD or the time division duplex, on the other side, is a method where both code and frequencies are used and time is used to differentiate the users.

The best advantage of WCDMA is that it can give h2er networks and maintain faster connection speeds. The major disadvantage is that it is not used all over the world because it has compatibility issues.

Difference between a CDMA and a WCDMA

In an age where internet connection is a basic necessity, it is important to make the right choice when it comes to the network that we choose. Thus, it is necessary to get h2 and reliable connections that can still further evolve in the near future. Both CDMA and WCDMA are results of the upgrade in technology, and thus, they are both as efficient as they can possibly be.