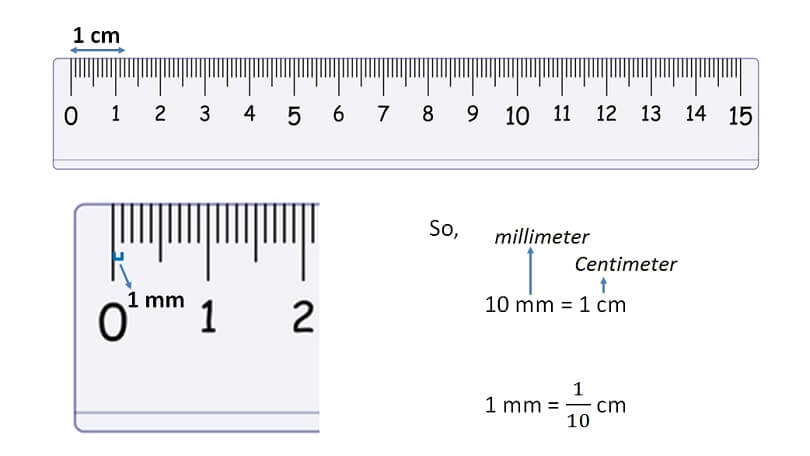 Measurement is one of the important things in our lives since we use it for many events. Measuring things correctly is important, including things such as time, distance, and length. After all, when you are buying something, you want to ensure that the measurements are right and that you are getting something worth the price you will pay for it.

Centimeter and millimeter are actually related to each other as ten millimeters are equal to 1 cm. This means that they have a proportion of 1:10. The symbol used for centimeter is cm, while the one used for millimeter is mm. A centimeter is often used for measuring things such as the height of a person, the length of a pen, and more. You might also want to try measuring things like that with millimeters, but it is not appropriate since it is very small, and thus, the quantity will be too large for convenience.

A centimeter is a term in Mathematics that is used for measuring specific quantities. A lot of school problems often use centimeters as the unit of measure, especially on geometrical exams, simply because it is very convenient and easier to imagine. Using centimeters to measure height is also pretty common as much as measuring height by inches would be.

A centimeter is mostly preferred in school as it is a standard. It is also used in rulers that are bought in stores. There are a lot of things that can be measured by centimeters, such as a staple, the width of a highlighter, the thickness of a regular note pad, half of a penny, and a whole lot more.

On the other side, a millimeter is a quantity that is used for measuring objects that are small. It is also normally used in the medical field, such as in measuring tumors. After all, the things that are inside the body are normally very small. It is also used for measuring height, although it is normally just the decimal value. It is known to be the smallest unit of measurement of length in the standard ruler on the metric system. Measuring tapes often have millimeters in them, although meter sticks tend not to have them.

What is a Centimeter?

In school, when students are asked to put a margin on their papers, they are often told to use a 1-centimeter margin. It is a unit of measurement that is most used in the daily life of an average person, which makes it all the more important to learn about.

What is a Millimeter?

A millimeter is a quantity that can be measured through a lot of different objects, such as a ruler, a measuring tape, or more. Most rulers would have three measurement denominations which are the inches, the centimeters, and the millimeters/ The smallest line would correspond to the number of milliliters. They are quite convenient, especially when you are measuring something that is very small. As centimeters would often have a decimal place, it actually refers to the millimeter.

The symbol for millimeter is mm, and it is from the name of the measurement itself. Most of the measuring tools are from the metric system. Most things inside the human body are very small, and that is why mm is often used in the medical world for describing things such as the size of gallstones, tumors, and the incision that needs to be made. A millimeter is equal to 10 cm, and it is certainly necessary to learn more about it to know when it is right to be used.

Difference between a Centimeter and Millimeter

Both centimeters and millimeters are used in measurement, and they are both popular in mathematics. They are thought at the primary level, and it is impossible to skip them. They are also used in everyday life, and if you decide to pursue higher status, you will be able to meet them more often. Centimeters are especially used to measure things such as height, while millimeters are normally used when it comes to smaller things such as things inside the body.