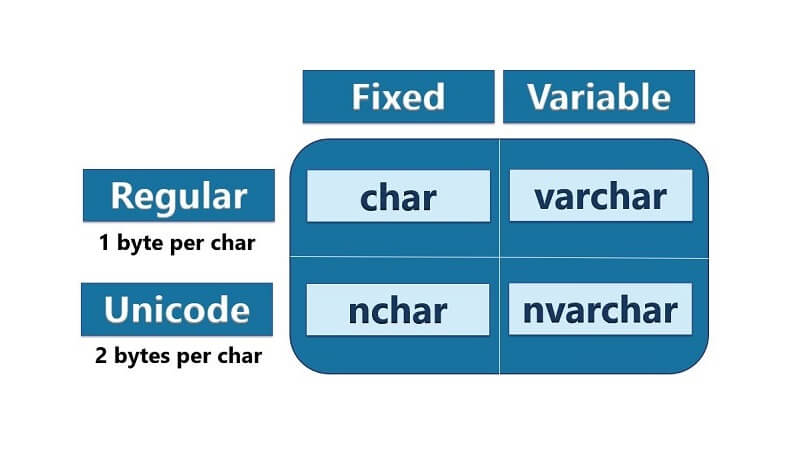 SQL is the most commonly used and taught programming language. This is how programmers store different strings of data of various lengths. The data types ‘char’ and ‘varchar’ are two of the most regularly used.

The SQL data type Char stands for ‘characters’ and is used to store characters. Only non-Unicode data, i.e. only one type of string per cell, is stored. It also has a set length, which can range between 1-255 characters.

Varchar is another SQL data type that can be used to store variable-length characters. ‘Variable character’ is what it stands for. It stores alphanumeric data, and the size is determined by the string being stored.

Varchar is a SQL code for storing variable characters, whereas Char is a SQL code for storing characters. Character is abbreviated as Char, and Variable character is abbreviated as VCHAR. VACHAR stores alphanumeric data of variable length and is dependent on the specific. Char stores values of constant length and is equal to the maximum of the column. VACHAR is a dynamic memory allocation system, whereas Char is a static memory allocation system. When the length of the characters is concise and known, programmers can utilize CHAR. When the length of the data entries varies, programmers can utilize VACHAR.

Char is a fixed-value data type that stores non-Unicode data values. ‘Char’ is what it stands for. Only when the length of data storage is known is it employed by programmers.

They have a maximum character limit of 255 characters and the storage capacity is the same as the storage size for the column because they only store one type of string. In addition, they store each character with one byte.

They use static memory allocation, which means the variable’s storage is permanent and the memory has already been allocated before the codes are input and executed.

Because they have distinct strings, their maximum character limit is 65,535 characters, which varies depending on the character limit of each string. They, like char, use one byte per character. They do, however, take an extra 1 or 2 bytes to store length information.

They allocate memory in a dynamic manner. When the length or amount of data to be saved is uncertain or variable, this is utilized. It also allows you to save data without having to worry about exceeding a certain amount.

They are used to store information such as addresses.

Difference between Char and Varchar

With computer language comes a plethora of data kinds and codes that cater to the most basic needs of consumers and programmers. SQL is one such language, and the data types ‘char’ and ‘varchar’ are similar.

The data type ‘Char’ stores fixed-length data values with a storage size equal to the column’s storage size. They’re mainly utilised by programmers when they need to store data in a specific range or with short data characters. Because they are non-Unicode data types, they have a character limit of 250.

‘Varchar’ is another data type that also stores characters, but unlike char, it can store alphanumeric or various string characters. They are used when the data values are not fixed and keeps varying. They have a character limit of 65535 characters as they store different strings.