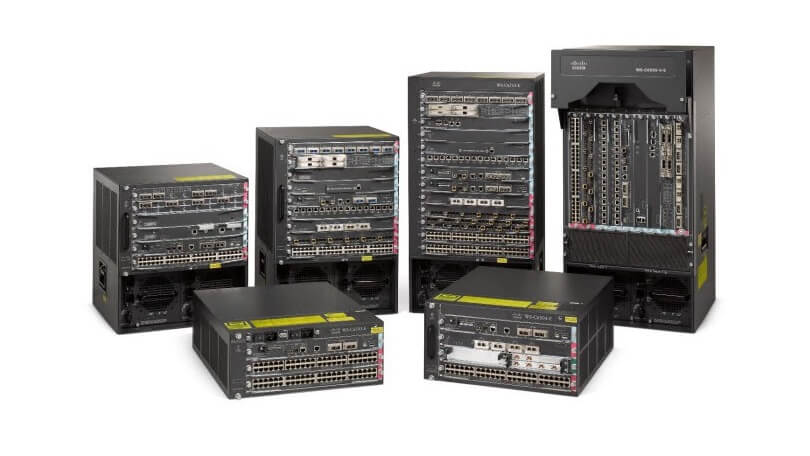 Cisco offers a variety of networking solutions for businesses, from modular switches to fixed-configuration models. Choose the ideal model by considering your requirements and the environment you need it to support. These switches allow you to stay current with your company’s ever-changing fundamentals. Cisco Systems developed 3 products that are sold under their Catalyst brand. There are Network Switches, access points, and wireless controllers. All of these devices offer a wide range of functionalities to enhance your network infrastructure.

Cisco Nexus switches have fixed and modular ports. They are available in several models with varying specifications and capabilities, depending on the type of data center network they will be used for.

The Cisco Catalyst switch is one of the most popular hardware switches for data centers, and it uses IOS as its operating system. The difference between these two switches is that the Nexus switches use NX-OS as their operating system instead. It is important to understand that PAGP and LACP are different protocols for creating an Ether channel. Catalyst Ethernet switches support these specific two, while Nexus switch only supports LACP.

Throughout the company’s history, Ethernet switches were not its only network interface. It has offered different other interfaces along with it in order to provide better solutions for networks. Cisco has bought many companies, renamed the products, and then released them in a different version. Crescendo Communications is the company responsible for developing technology in the Catalyst 6000 and 5000 series. In 1994, Kalpana incorporated a Catalyst 3000 series. Grand Junction Networks offered the 1700 and 1900 series in 1995, and the 2800-series Catalyst in 1996.

Cisco Systems introduced its Nexus switches on 28th January 2008. The initial design for the Nexus 7000 series consisted of 8 I/O module opening in front, two supervisors, and five switches at the back. Nexus offers many different models aside from the 7000.

What is the Cisco Catalyst?

Catalyst is the brand name for a line of network wireless controllers, switches, wireless access points sold by Cisco Systems. Cisco is one of the top companies that offer a number of networking devices. This includes Ethernet Switches and other modems, routers, switches, and much more.

Catalyst switches allow for easy, flexible management. Using telnet, serial terminal,  or even Secure Shell to set up the switches is an easy and convenient way to set up your network. SNMP is an open standard protocol that serves for the measuring and monitoring of a number of statuses, like system availability and traffic flow. It’s possible to run an HTTP server on a wide range of devices.

The configuration of the switch is made in plain text, which makes it easy to audit. There’s no need for additional software to make a suitable setup. It can be useful to set up a TFTP server for storing configuration and IOS files in locations with many devices, such as offices. Use a text editor, TFTP server, and the device’s default format to upload and copy complex settings from a Cisco device. A TFTP server, on the other hand, may raise security concerns.

Catalyst switches vary in the number of ports that they have. They range from twelve to eighty, depending on the model you choose. A modular switch, on the other hand, is a Catalyst switch in which practically every component, from CPU cards to switch cards, is inserted independently.

What is the Cisco Nexus?

Nexus series data center switches of cisco have a modular design that offers flexibility. Fixed ports can be combined with onboard or add-on modules to create different configurations of the switch, which is key for building scalable network infrastructure. The 7000 family’s first chassis is ten-slot chassis along with 2 supervisor engine slots, 8 I/O module slots in the front, as well as 5 fabric module crossbar switches. The Nexus 2000, 4000, 3000, 6000, 5000, and 7000 are all variants of the same power supply line.

The product line of Nexus Switch includes a range of networking technologies that are software-defined that make it easier to connect and manage various data center resources. SDN is one of them. The goal of this project was to create a more efficient and consistent networking environment across different physical, cloud, and virtual environments.

Business and IT Agility isn’t a one-size-fits-all solution for all workloads; rather, it’s tailored to meet high-availability requirements. To allow for fluctuating traffic patterns, scalability, and demanding workloads across various data centers, the fabric relies on dynamic resource allocation. With the advent of converged, virtualized, and cloud environments, it becomes increasingly difficult for network teams to administer their networks.

However, with integrations in both hardware and software, rules can be more consistently set that are directly integrated with the fabric and also awareness of this environment. By decreasing the number of points of failure, using, multi-protocol, consolidated solutions for SANs  LANs reduces interruptions to infrastructure and operations. In production scenarios, the single point of control helps to avoid downtime.

Nexus Switches provide a quick and stable switching infrastructure that allows users in virtualized data centers to achieve the high performance they want. These switches were created primarily for usage on next-generation servers, and they offer both flexibility and scalability. You’ll receive continuous system operation, transport flexibility, and I/O consolidation with these switches. Furthermore, the complex networking characteristics like hitless and high availability ISSU that these switches offer are also advantageous.

Campus and data center networks both use the Catalyst switches, but they are at different layers. The Nexus is mostly seen in the core layer of a network, whereas the Catalyst is used primarily for distribution and access layers. Nexus series switches support the following: Ethernet, FCoE, and Fiber Channel. The Catalysts do not support these at all.

The Nexus and Catalyst switches by Cisco support a number of applications. These switches are available with Ethernet connectivity as well.

Your options for switches are either an industrial Ethernet switch or a small LAN switch from Catalyst. For example, the campus LAN switches don’t need as much power to work properly and can be used in smaller spaces like offices. The industrial Ethernet switches have more ports so they’re perfect when you need them in larger spaces such as warehouses or factories. They seek to integrate wireless and wired connections into a single control system with security built-in.