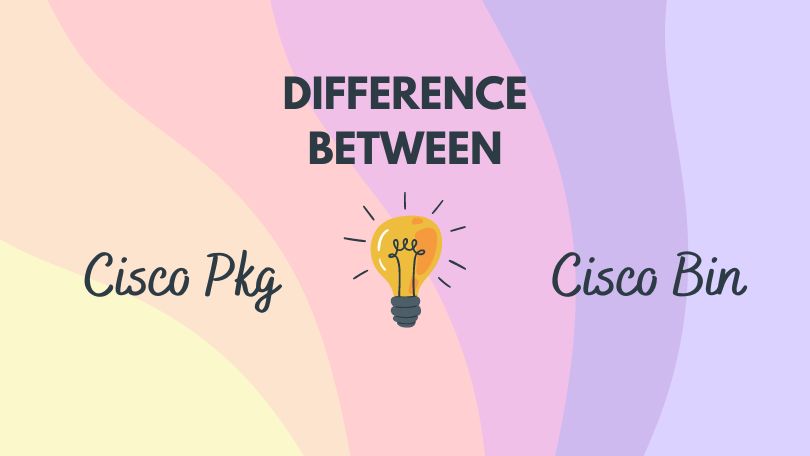 The IOS File Systems (IFS) of Cisco is a tool that works as the only interface for every system file that can be found on a routing device. Which also manages to offer an efficient way of storing &amp; finding your essential files. Configuration files and Software bundles are managed by a variety of files, including Cisco bin and Cisco pkg.

The Pkg is a file package that can be added to a device and contains a variety of file formats. It is saved on the device’s system board. The Cisco package is saved in the flash memory’s system board. This package contains all of the XE packages of the Cisco IOS  for your device. It lets you know which software bundles are on your device and provides detailed information about each of them.

Bin files are used in Cisco to speed up the booting process. They’re stored in binary format so there’s no need to download them, and they use compressed information that saves a lot of time.

What is the Cisco Pkg?

XE package file of Cisco IOS is simply referred to as pkg files. They can be added separately from the XE bundle of IOS and can be used to boot the switches. The Package file contains a list of all the packages that exist within the system. When in the privileged mode of EXEC, a command is run.

When in the installed mode, the switch shows the file and properties of the installed provisioning or package. It is important to keep this feature in mind when accessing multiple installation files. If switches are in the bundle mode, boot options are displayed at the very top of the LED display. They include where to find a particular file that has been booted and what it looks like.

The command “software install source” can be used to copy a Cisco package from one member of your stack to another. You can even use that command if you decide to move members of your stack from one stack to the next.

There’s a command called switch software install sources, so you can change your status without affecting the way you normally use your computer. This is often offered as a compacted collection of the installer file that can be used to install the application.

What is the Cisco Bin?

The XE bundle file of Cisco IOS is referred to as “Cisco Bin”. To view information about these bundle files, utilize the “show package of software” command. In the mode of privileged EXEC, this command is applied. The commands print a line that says “file of System bundle is..” This line can show the name and location of the Cisco IOS XE bin file.

Files of Bin are saved on a flash memory system board that can be accessed by multiple teams. When you upgrade to a new version, you don’t have to keep carrying the old ones with you – it’s all done online for you. With this router, you can configure and unconfigure your device without backing up files and going through a tedious process of hooking up the device to a computer. Also, when you want to upgrade your bundle or configure local settings on the device, just download the necessary file from your computer and place it onto local storage where your router is so that it can be configured.

The bin script on the file system specializes in finding and modifying your configuration, so it saves a copy of the current configuration with ease. A game-changer has occurred with the switch, and now it’s reloaded, you can’t go wrong. In bundle boot mode, the base unit boots as soon as power is supplied to it with the application software load on demand. The open-source program contains packages such as boot, runs, and mount. It also gives additional memory to devices like routers, switches, and firewalls. The binary executable file is abbreviated as a bin.

RAM is used as a scratchpad for storing instructions during the long loading processing file making booting faster. This bit translator directly interprets the binary code and can be used on embedded platforms. It also doesn’t need interpretation or initialization of binary code to make it fully functional.

Difference Between Cisco Pkg and Bin

Cisco uses a flash system to stock the files. At times, only one flash device is required to complete a particular task. The pkg and bin files are the two major configuration files for customizing and starting the IOS software.

Though both file bundles aid in the device’s efficient booting, their execution and storage methods differ. There are also different modes on each of these machines for people to use depending on their individual needs. Our two types of deployment can be easily switched between. It’s simple to do so, and there is no interruption of features or services during the process.