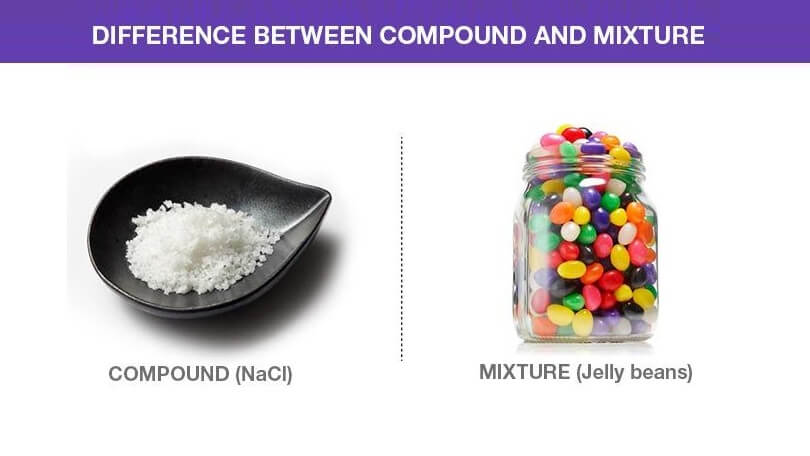 Compound and mixture have easy dictionary definitions in English, but they get more difficult when studied as scientific concepts.

The difference between a compound and a mixture is that a compound is made by chemically combining two or more elements in a specific proportion. Salt, for example, is a compound because it consists of two elements: sodium and chlorine. When two or more substances are physically joined in undetermined proportions, a mixture is generated. Because it is made out of sand, water, and gravel, cement is a combination.

Physically, the elements of a compound cannot be separated since they are chemically linked together. Physical methods can be used to separate the individual constituents in a combination, unlike compounds.

What is a Compound?

A compound is formed by chemically joining two or more chemical components together. The electrons of the atoms that make up these elements are used to bind them together, resulting in the formation of a new material called a compound.

The proportions in which the elements are joined together are predetermined. Each compound’s formula is written using the elements that make it up and their proportions.

H2O is the formula for water. This demonstrates that water is a chemical made up of two hydrogen atoms and one oxygen atom. Atoms bond in a variety of ways, and the bonds that form compounds are classified accordingly.

An ionic bond is formed when one atom gives up an electron and the other acquires one. When atoms lose and gain electrons, their electric charge changes, and they form ions.

This is an ionic bond, and the chemical it produces has the formula NaCL, or salt in layman’s terms. Covalent bonds are the most prevalent type of bond found in nature. In covalent bonds, electrons are shared between the two atoms rather than being transported from one to the other.

These two electrons form a new orbit that encircles both atoms and binds them together to form a molecule. Covalent bonds are produced between atoms with equal electronegativity, unlike ionic bonds, which are generated by the attraction between opposing charges.

This type of bond is formed between metal atoms.

Both atoms’ free electrons are shared in lattice form here, with neither losing nor gaining electrons. A metallic bond is exemplified by platinum.

What is a Mixture?

A mixture is made up of two substances that have been physically mixed. The chemical composition of each material, however, remains constant.

As a result, they might be physically separated. In contrast to a compound, the proportions of the constituents in a mixture might change and are not required to be exact.

It is important to note that while the chemical composition of the combination does not change, the physical properties of the substances in the mixture do.

It’s difficult to separate its components because one is usually a solute and the other is a solvent.

Even though there are various components, such as the air we breathe, which comprises a variety of gases, solutes such as oxygen and carbon dioxide are balanced with a solvent such as nitrogen, resulting in a homogeneous mixture.

A saline solution, which is just a mixture of water and salt, is a common example. A heterogeneous combination, on the other hand, lacks homogeneity. Differentiating and isolating the particles of the substances involved is simple.

If sand and stones are mixed together, for example, separating the stones from the sand is not difficult. Mixtures can also be classified based on the size of the particles they contain, in addition to this simple classification. Mixtures can be split into solutions, suspensions, and colloids in this way.

The term “solution” refers to a mixture that is homogeneous. The particles are so little that they can’t be seen separately once they’ve been blended. Furthermore, the solute will dissolve fully in the solvent. This is where a mixture of salt and water would fit in.

A colloid is formed when a homogeneous mixture contains particles of medium size.

Even after mixing, the particles may be seen independently, and they can be separated by filtering. Colloidal mixtures include fog and jelly, for example.

Solids are mixed together in a solid-solid mix, and they can be easily separated by sifting. Soil is a classic example of a solid-solid combination. Solid-fluid combinations, which combine solids with liquids or gases, are next. The ingredients will separate even after they have been blended together.

Solid particles will progressively fall to the bottom if they are heavier than the liquid or gas. They will rise and float on top of the mixture if they are lighter. Dust is heavier than air, so when it interacts with air, it forms a solid-fluid mixture. Filtration is generally used to separate these combinations.

Fluid-fluid mixes are the last type of suspension mixture. Even when liquids or gases are mixed with other liquids or gases, one will be heavier than the other, allowing them to be examined independently.

When oil and water are combined, the oil globules remain suspended in the water and do not dissolve.

Difference Between Compound and Mixture

In simple terms, a compound is created when two components form a chemical connection and form a new material with its own set of qualities.

When two substances are joined but are not chemically bound, they form a mixture in which each of the constituents retains its previous physical qualities.