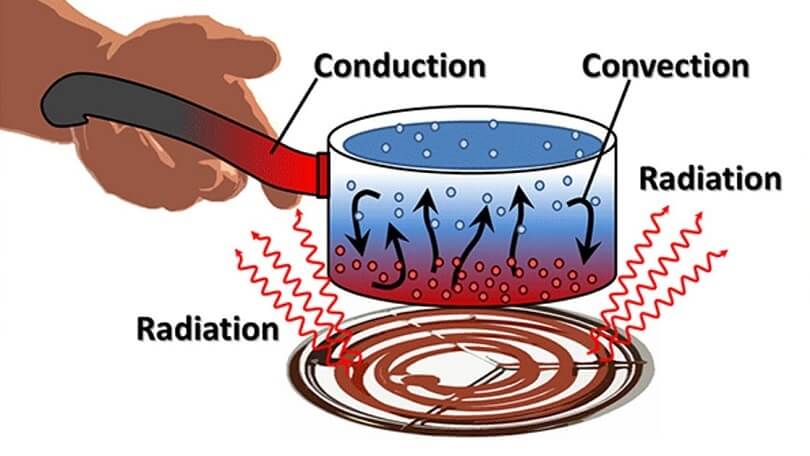 Heat creation is a process that involves particle motion. Heat is explained in simple terms by the activity of molecules, and the energy emitted by them causes heat or is turned into heat.

When a person exercises or engages in any other activity, their body heats up and perspiration is created. It’s simply the transfer of heat, whether through conduction or convection, when food gets warm or heated during cooking.

The reason for heat transfer is scientific; it may appear simple and cliche to warm food, but there are scientific reasons for it. Energy is formed when invisible or tiny particles are charged, and this energy is transferred in the form of heat.

Heat transmission can be direct or indirect, and there are a variety of materials in which heat can be transferred and others in which it cannot, for example, not all forms of plastic can withstand heat.

The distinction between conduction and convection is that heat is transported directly in conduction, whereas heat is transferred through a fluid in convection. Both result in the emission of heat, but the methods are different.

The process of transferring heat or current is known as conduction. Conduction is the direct movement of energy from one atom to another in the form of heat and current.

Solid, liquid, and gaseous forms of matter can all conduct electricity. The best heat transfer occurs in the solid-state because the atoms are tightly packed, allowing for a higher rate of transmission. The density of molecules affects the rate of heat transfer, whereas liquids and gases, on the other hand, are less efficient in heat transfer due to low molecule density.

Conduction can be divided into two types: heat conduction and electrical conduction.

When the temperature of molecules is raised, a vibration is produced, which creates heat in the molecules, and then heat is transferred inside the densely packed molecules. When a heating pad is placed on the skin, it generates heat in the muscles as well.

Conduction is influenced by a number of elements, including temperature differences, length, cross-sectional area, and the material. Every material has a varied conductivity, such as aluminium, bronze, copper, water, and so on. The highest conductivity is found in metals.

The conduction can be computed using a formula in theory using a variety of ways, such as Ohm’s law or Fourier’s law. When the material’s conductivity is known, these formulae can be used to compute the rate of heat transfer. The law of reflection or refraction does not apply to conduction.

The process of convection involves thermal expansion, which means that when a fluid is heated from below the surface, the lower layer of liquid is heated and thermally expanded, resulting in a higher molecular density than the liquid on the upper surface. Because of the buoyancy of the less dense particles, the hotter liquid rises and is replaced by a colder liquid.

Forced convection is a type of convection in which external forces, such as fans, water heaters, and geysers, generate convection.

Medium (liquid or gas), temperature, and a heat source are all factors that influence convection. Convection does not support electric current, which is one of the contrasts between conduction and convection.

A land wind (occurs at night) or a sea breeze (occurs during the day), fans used to cool the room, heaters used to heat water, or steamers, are all instances of convection.

Natural convection is difficult to calculate, however forced convection may be computed mathematically using Newton’s law of cooling’s formula. The formula is as follows:

P= dQ /dt- the rate at which heat is transferred

T – the temperature of the immersed object

T0 – the temperature of the fluid which is under convection

Difference Between Conduction and Convection