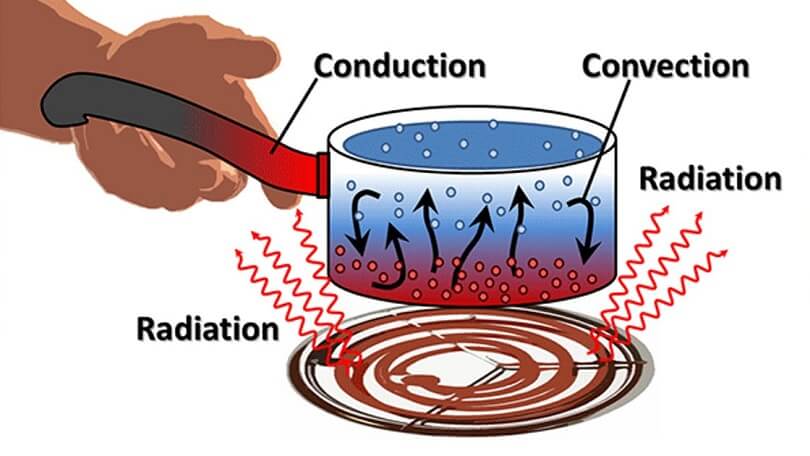 A heat transfer occurs when thermal energy is transmitted from one system to another through the dispersion of heat.

There are three ways to do this: conduction, convection, and radiation.

Conduction Vs. Convection Vs. Radiation

The method heat is transmitted from a zone with higher kinetic energy to a zone with lower kinetic energy differs between conduction, convection, and radiation. Conduction occurs when two items come into direct physical touch. On the other hand, convection occurs when heat is transported by the movement of molecules. Radiation, unlike the other ways, does not necessitate physical touch between two objects.

Conduction is the process of heat transfer between two things through direct contact.

When molecules in one thing absorb heat energy, they begin to move quickly and come into contact with molecules in surrounding objects, resulting in an energy transfer.

Conduction is a regular occurrence. Conduction occurs when your hand comes into contact with a hot object, and heat is passed from the object to your hand.

Some considerations must be made in order for conduction to occur.

The first is the temperature gradient, which describes the direction in which heat is flowing as well as the pace at which it is transferred. Conduction from a hot source to a cold source (or a source devoid of heat energy) continues until both bodies reach thermal equilibrium.

The size of the things involved is also an essential consideration. Larger items require more heat to warm up, but they also lose heat more quickly. This is due to the fact that the larger their surface area is, the more open air they come into touch with. The physical characteristics of the things must also be considered.

When you use a wooden spoon to cook, you’ll notice that it doesn’t get too hot. This is due to the fact that wood is a poor conductor of electricity.

However, because metal is a good conductor, heat will be transferred to it fast if you use a metal spoon. Insulators are sometimes known as poor conductors. They obstruct the passage of energy away from the source.

Polar bears, for example, can survive in frigid environments because their fur acts as an insulator, trapping heat inside the body.

When a heated fluid moves away from the source of heat, the mass motion of the fluid carries energy with it. Convection is a type of heat transmission that is similar to conduction.

Heat reduces the density of fluids like air and water, causing this process to occur. The fluid rises due to the decrease of density, resulting in convection currents that can transmit energy.

As the heated layers of the fluid rise, the cooler layers that haven’t lost their density drop towards the heat source until they are heated and rise.

Convection is divided into two types: spontaneous and forced. Convection happens spontaneously due to buoyancy in the former. Temperature differences result in different densities.

When the sun heats up the earth, for example, the water absorbs the majority of the energy, although it takes longer to warm up than land.

This is why the breeze is often stronger near the water. An external source, such as a fan or a geyser, is utilized to provide forced convection. It is connected to Newton’s law of cooling, which has the following equation:

Unlike conduction and convection, which both need actual physical contact between two bodies, radiation is heat transmission that occurs even when the bodies are separated in space and do not come into contact.

Atoms combine to form molecules, which make up everything in the universe. All substances continue to emit energy through electromagnetic radiation due to the rotation and vibration of atoms and molecules.

Electrons having a lot of energy at high atomic levels fall to lower atomic levels with less energy. Electromagnetic radiation is emitted to replace any When an atom absorbs energy, its electrons ascend to higher energy levels. As a result, the temperature of the substance will not vary if the rate at which energy is absorbed is equal to the rate at which it is emitted.

The temperature will rise if the former is greater than the latter, and it will fall if the latter is lower.

The sun is a good example of heat transmission by radiation. There is no physical medium for heat transfer and it does not come into contact with any of the other planets.

Yet, because of the electromagnetic radiation it releases, which allows its rays to reach the earth, we can feel its warmth.

Difference Between Conduction, Convection and Radiation