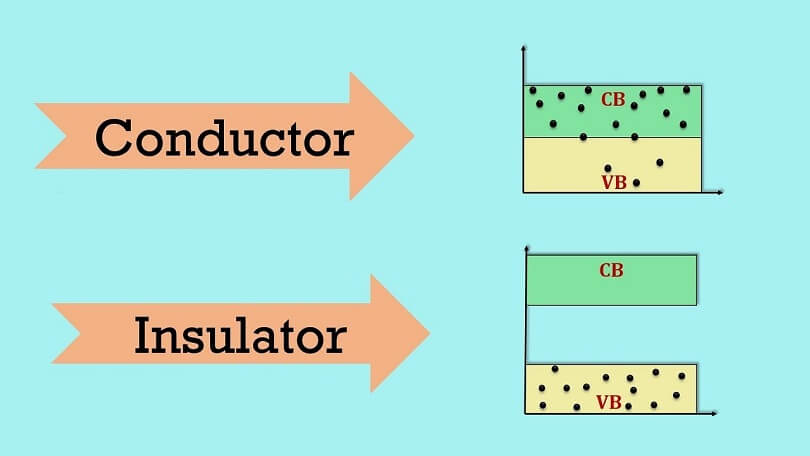 Different types of elements can be found in our environment. Shape, size, color, texture, polarity, malleability, and solubility, among other physical characteristics, are used to classify these elements into separate categories.

Conductivity is one of the most essential categories for classifying elements. That is, an element’s ability to freely let ions or electrons. Elements are classed as conductors or insulators based on their conductivity.

The difference between a conductor and an insulator is that the latter is resistant to free thermal or electric energy flow. The former, on the other hand, is open to heat or electrical flow.

A conductor is a material that allows electrons to freely travel from one place to another in one or more directions. The energy in the form of heat or electric charge can easily pass through the material due to the free passage of electrons.

An insulator, on the other hand, is a substance that prevents electrons from freely flowing. On the contrary, it confines the electrons within the atoms of a material, preventing the free flow of energy in the form of heat or electric current across the material.

It can refer to a variety of substances that allow electric current or thermal energy to flow. They have a high conductivity and a low barrier to electric or thermal energy transfer. The presence of ‘free electrons’ in the atomic structure of a conductor causes this.

The term “free electrons” refers to electrons that can easily be exchanged with electrons from other atoms. That is, the relationship between them and the atom of which they are a part is weak. This weakness allows energy to move freely from one atom to the next.

There should also be no space between the conduction and valence bands (known as the forbidden energy gap) so that electrons can readily flow to other atoms.

Unless the repulsive interactions between surplus electrons are reduced to the maximum extent feasible, an object constructed of a conducting material will receive the charges imparted on it from another object and allow those charges to be disseminated all over its surface.

When both objects are made of conducting materials, the exchange of charges between them is simple. It’s worth noting that most conductors are formed of metals including mercury, copper, aluminium, and silver, among others. Silver is the best conductor of them, although it is not employed in the manufacture of electric lines due to its high cost.

It’s defined as a substance or material that slows or prevents the flow of electricity or heat. Low conductivity and strong resistance to the transfer of thermal or electric energy characterize insulators. Because the atoms in the insulators have a very strong covalent link between them, this happens. As a result, electrons are unable to freely migrate or trade.

When a charge or heat is applied to an insulating material item, it remains in the initial position and does not disperse throughout the object’s outer layer. As a result, rubbing that object with an appropriate material is required to charge it. Induction is another way that can be utilised to charge such an item.

Insulators are used in electric circuits to keep conductors separated from one another and from other things in the circuit’s vicinity. Insulators ensure that current passing via wires stays within the wire and does not flow to another conducting material object.

They absorb radiant heat to break up the heat flow channel in the case of thermal energy. The majority of insulators are made of non-metallic materials such as rubber, plastic, porcelain, mica, and fiberglass.

Difference Between Conductor and Insulator

It’s vital to remember that a material’s conductivity is determined by the structure of its atoms. If the atoms of a substance can’t retain their outside electrons together, it can be an excellent conductor. Heat or electric charge can flow from one atom to another, and hence across the material as a whole, because of these outside electrons. If the electrons in a substance’s atoms are densely packed, the material is a poor conductor or insulator.

Nonetheless, both conductors and insulators are critical for us, particularly when working with electric appliances. Conductors are used in switches, sockets, and electric plugs. Rubber and polymers are employed as insulators in the construction.