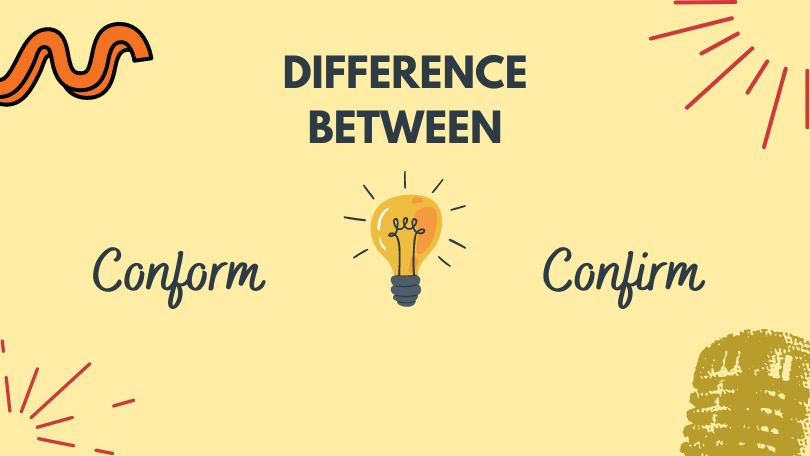 With many people speaking a multitude of different languages, it’s possible to get confused about the difference between words and where they should be used. Have you ever heard of homophones? This term refers to words that imply similar pronunciation but different meanings.

Homophones can sometimes make sentences difficult to understand, which is why they are not appropriate when the words are switched around. Confirm and conform have opposite meanings, so the terms can give rise to many confusions.

To conform is to accept rules that are given without questioning them. To confirm is making sure something actually happened or was true.

In a very simple sense, to conform means something is abiding by the commands just like any machine would. This word has several applications in several situations. For example, all of us conform to the rules of traffic on the roads by going in whatever direction is permitted.

This definition can also be applied to explain human behavior. So, in any case, conforming means following and acting in accordance with the provided rules and regulations. We accept it as is without asking questions, which is known as conforming.

Working or Living in accordance with the law is conforming. This means obeying or following it, which generally speaking corresponds to reality. Conformists and non-conformists are born based on this. Conformists are people who obey the rules and follow what they’re told to do. Non-conformists, on the other hand, don’t always agree with established norms or conventions.

The word “confirm” is used to denote the acceptance of something according to the truth. It means acknowledging the fact that it has been accepted based on what was said, or it can be interpreted as accepting something to be true. This word is used in defining a decision that’s definite. Confirmation is used in the present, past, and future tense. It means checking if everything is alright or not.

To make sure that all the things on your list are collected or used, this word is used. You can confirm an agreement or appointment with this word. We make use of this word to explain why things have happened.

We use confirmation as evidence for any kind of things we come across. In a sense, it’s like tasting an item to confirm what it tastes like–it’s just another way of doing this! We call the people to find out what they know about the news we heard. When we say that something is not true, then this means that it is against confirmation. We’re acting in accordance with what we have already confirmed when we give assurance.

Difference Between Conform and Confirm

These two words both have meanings that are different depending on their spelling and pronunciation of them. The term conform generally means to follow rules or guidelines, and instructions. That is why it’s used when someone follows the set of commands for example a person working in an office on any given day.

When booking a hotel, we are required to confirm the dates of our stay. College students are expected to conform to college uniforms. When we don’t want to conform, we are called rebels in a negative light- an opposite of who we should strive to be. In this context, we are fitting in with the rules and customs when we live by them.

At any level of consistency, one conforming shows compliance with all rules and regulations. Confirming a point means to provide the reason for why it’s correct, or explain why something is true. The definition of support, in this case, would be because the synonym for confirm, which is support, shares the same meaning.