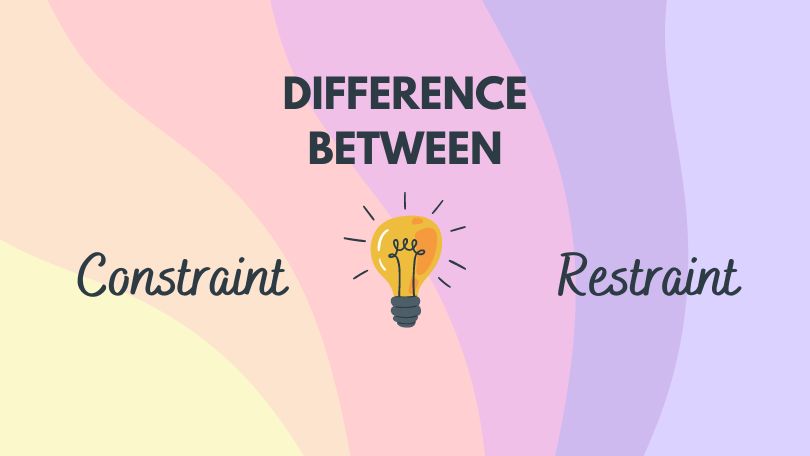 When the term “restraint” is seen in any sentence, it implies limiting something or someone by exerting force to keep them under control. When you place a limitation on something or somebody, it is similar to what we call ‘constraint’. The distinction between these two words becomes even clearer when talking about physics or mathematics.

Restraint and Constraint have an interchangeable meaning in the sense that constraint means to impose a restriction over any action, whereas Restrain, mostly used as a verb, means to hold something back.

So, “restraint” is the prevention of an act through certain control mechanisms. We could call this what it really is – a constraint. While “constraint” refers to limitations that deter our liberty to act freely or in such a way that we are not able to do so easily and quickly under normal circumstances.

Restrictions on an individual- those that limit one’s freedom- are typically referred to as constraints. In certain situations, constraints can limit the actions of individuals. The word ‘constraint’ stems from the French term constraindre, which means to limit or obstruct certain actions.

It is a constraint if there are external factors that dictate how we should live our lives. Our values and morals usually come from outside sources- people, books, or the media. Constraints can also arise from personal beliefs and assumptions about what is right or wrong. There are a variety of origins for constraints, ranging from financial to political to social. Constraints can also come from legal and other domains of life.

The word “restraint” is derived from the old French word retraindre, which literally translates to “to stop”. The word connotes the use of force to restrain someone. Things like “restraints” imply certain commonly used measures to delimit the actions an individual can perform, which are usually things like handcuffs or chains.

Restraint is also about self-control. When most people restrain themselves, it means they regulate and curb their own behavior. Restraint generally describes a situation in which people show careful patience and discretion in a manner that doesn’t allow them to follow their natural impulses.

Furthermore, the word can also be used to indicate article safety products like seat belts. In such situations, ‘restraint’ should not be changed by ‘constraint’. Some instances of using the word ‘restraint’ in sentences are illustrated below:

Major differences Between Restraint and Constraint

The difference between the words “constraint” and “restraint” is sometimes ambiguous. We want to clarify what they mean so that you know when to use which one.

A constraint limits the freedom of action and is usually in the form of an obligation. For example, a law could be called a constraint because it limits people’s actions. The word restraint has two very different meanings. The first one implies that the subject is being controlled or held back, while the other just means that they are limited to certain actions. Generally, the former is used in context with difficult & complex tasks, while the latter connotes the use of control mechanisms to prevent an individual from performing an action.

These words can be understood in different contexts, including science. However, their meaning in mathematics is completely different. Similarly, their origins are unrelated as well.