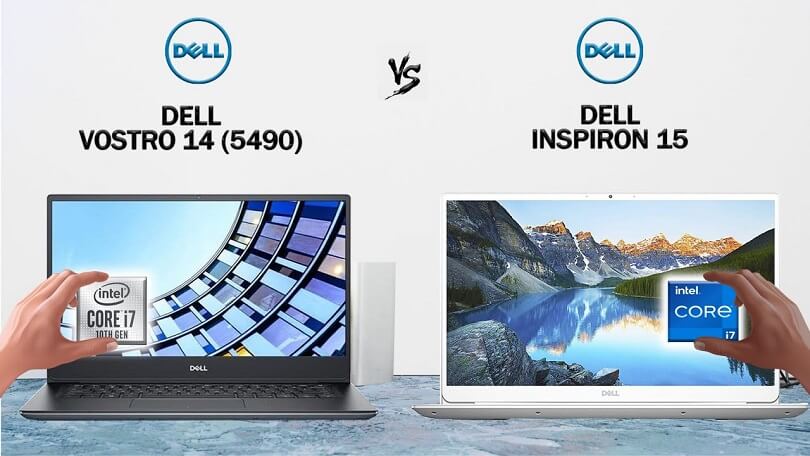 Dell is a leading manufacturer of computers for quite some time now, including laptops, desktops, and many other smart devices like printers, servers, and cameras. They offer convenient store locations in addition to online discounts. What began as a room project at the University of Texas has grown into an international corporation.

With the majority of businesses, offices, institutions, and schools migrating to online communication and education this year, demand for reliable and incredibly quick technology are greater than ever. The Dell Vostro and Dell Inspiron are two of the company’s best-selling series.

What is Dell Inspiron?

The Dell Inspirons are aimed towards people who desire a computer that matches their personal taste. They come in a variety of colors and customization possibilities to blend into any aesthetically pleasing home atmosphere. According to this viewpoint, the additional preinstalled software it includes, the better it is for an individual user who wants to use it for individual purposes. The 15 3000 series has an operating system of Windows 10, an i3 processor, 8GB of RAM that can be increased, and a 256-gigabyte hard drive that does not have an SSD.

The 15 5000 series, is a little more expensive and offers comparable specs with the exception of the AMD graphics and  i5 processor. An Nvidia GeForce 940MX graphics and 256 GigaByte SSD card are included in the 7000 series. They also offer a gaming-specific series known as the “pandora” version. These series’ ports include HDMI, UBS (A, C types), audio jack, and drive reader of the optical disk.

This model is ideal for gamers, and it also includes support for a variety of programs, such as MATLAB, that is frequently required by its target demography. It’s also a touchscreen, foldable, and detachable from the keyboard, allowing it to be used as a tablet. It’s ideal for personal usage because of its elegant design, wide color selection, and low price.

However, there are a few drawbacks to this device, such as the display, which is of mediocre quality at best, and the plastic body, which has its own set of drawbacks.

What is the Dell Vostro?

The Vostro is primarily designed for small enterprises and professionals. It’s also more cost-effective and comes with fewer pre-installed programs, making it ideal for the usage of office, where users will typically need to install additional software to meet the company’s demands. It comes with a professional version of Windows and 1 TB of hard drive storage in the model. They offer two series, the 5000 and 3000, which have been the basic newest Windows models with processors ranging from i3 to i7 depending on the price, and both the battery backup and display are well-built.

Although that was previously withdrawn from 2013 to 2015, it is now back on the market and is a true help to small businesses, particularly given that the majority of work is done online or via a digital link. They may not come in a wide choice of colors and are generally black or grey, but they are well-made and ideal for long-term use. Despite all of these fantastic features, the model lacks a decent integrated fan and may suffer from certain touchpad difficulties.

Technology’s importance is felt more than anytime now. As a result, having a nice desktop or laptop to make life simpler and smoother is more than simply a requirement. Dell has a lengthy history and is unquestionably a reliable name. Both the models are suitable for everyday usage and more; however, while selecting one of the series pcs or laptops, the purchaser must consider their intended application.

If you’re looking for a laptop that’s both affordable and long-lasting, the Vostro model is the perfect option. The Inspiron series, on the other hand, is the best match for users who want a laptop for personal use without installing additional apps or relying on Dell’s technical support.