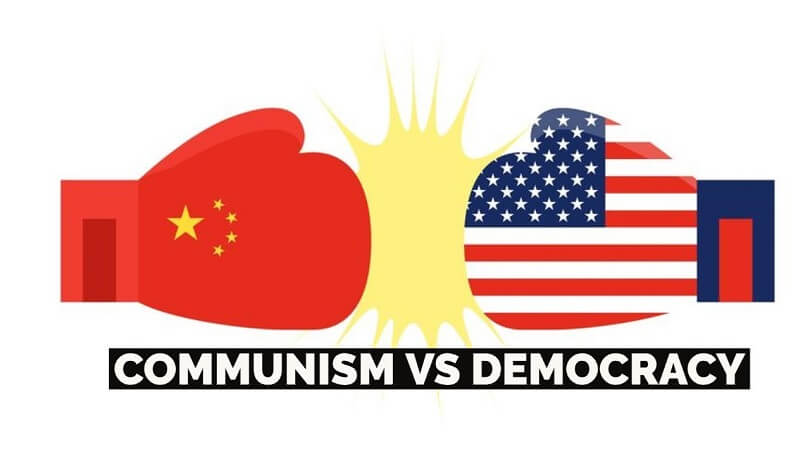 Different political systems have been adopted by countries in the world for their operating. For example, communist countries, social countries, monarchy (in which king and queen rule the country) and some countries even have a dictatorship.

But communism and democracy have been the most adopted political systems. In the domain of politics and economics, both these systems are very unalike, but the same ideology is carried by both the systems that are empowering the people, to empower them to speak for their rights, vote whomever they want to and to represent.

There is a difference between democracy and communism. In a communist system, industry, profits, and capital are controlled by the government to eliminate the disparity among people. It is also called Marxism as Karl Marx invented this term. Although in democracy, people have the right to own their private property, invest their capital wherever they want to, and keep the profits.

Communism follows the ideology that everyone must be treated impartially. Thus, communism creates a society where all the property is held by the government to eliminate inequality. Yet, democracy allows the people to have their private properties but gives equivalent rights to people to select their representatives.

What is a Democracy?

In a democracy, all the people of the country are treated equally, they have the right to raise their voice and the right to live freely. People choose their leaders by voting for them. The majority of the world countries follow democracy. It could be a perfect political system, but it is also the use of minority by the majority. For instance, the majority includes landowners owning private properties and the minority includes the workers or labor. The landowners don’t give wages or salaries to the workers timely, or they give them fewer wages but take more work from them.

In a democracy, everyone has the right to choose and follow their religion but nowadays, the majority don’t let the minorities live freely according to their religion and intervene. Democracy revolves around the idea to hold the private properties’ capital and the property owners enjoy profits. There is no interference of the government in the matters of the private property owner. But the government facilitates them such as railway services, free education, etc.

Everyone has equal rights and benefits in a democracy such as health and education. But sometimes people are forced to vote for a particular party to make that the ruling party of the country. This is where democracy gets ugly.

As discussed earlier, communism is also called Marxism. This political system revolves around the idea that there is no minority or majority. Everyone is treated equally with equal rights and benefits as all the private properties and capital are held by the government. In communism, religion is viewed as inferior because the communist government thinks of religion as a drug that divides the people. The communist government may be considered a dictatorship. There is no government to any extent in this political system. This system tries to maximize the profits and distribute among the people equally.

War is normal in this system as compared to other political systems in which war is avoided and considered inferior. This ideology is always criticized because it hampers the growth of the country whether it is about technology or human rights. Overall, there is no concept of majority and minority as everyone is treated equally. In countries with communism, there are no private holdings and no religion.

Difference Between Democracy and Communism

It is evident from the over that both the frameworks rotate around distinctive belief systems communists accept in tossing absent property, while democracy spins around the thought of private possessions. But both these models don’t truly exist within the idealized world. Democracy takes afterthought of giving break even with rights in voting though communist nation convictions in fascism that’s the run the show by the ruler anything political systems run within the nation, individuals ought to acknowledge this as the nation is for the individuals by the individuals and with them.