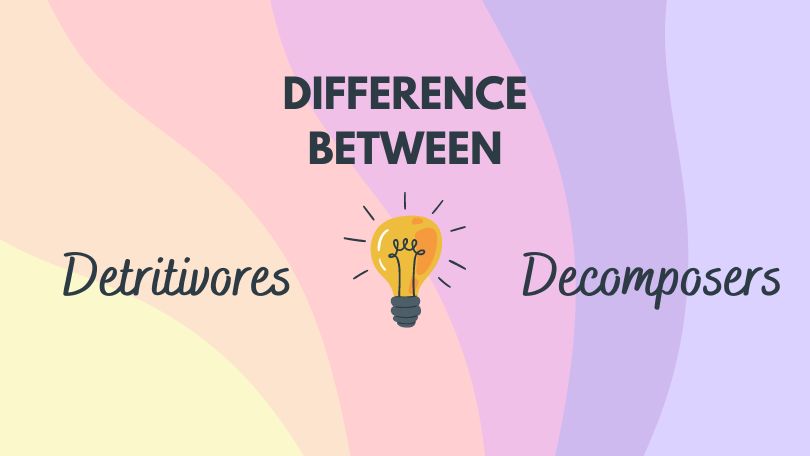 These living organisms can tear down a carcass to simpler substances; then, the Detritivores would further simplify the detritus substance. The main distinguishing factor between the two is that most decomposers are in bacteria and fungi forms, whereas Detritivores are in worms, woodlice, dungflies, slugs, and millipedes forms.

Additionally, decomposers tear down organic material from decaying matter while Detritivores recycle decomposing matter. The two organisms depend on each other to exist.

Detritivores are a type of decomposers that get their nutrition by feeding on detritus. Detritus, here are organic substances of dead decaying animals and plants. They use a feeding strategy that consists of consuming feces called coprophagy to get nutrition. They can also break down organic matter by orally digesting it to absorb nutrients.

The species that form Detritivores do not have bones. They include mollusks, earthworms, woodlice beetles, and butterflies mites. You can also find this organism in marine waters; some include lobsters, echinoderms like sea cucumbers and stars, crabs. The marine Detritivores have similar traits in the ecosystem as those that live in the terrestrial ones usually found on the sea bed.

The role of Detritivores is to decompose and decay materials. They function in the ecosystem to produce carbon, phosphorous, and nitrogen cycles. They mainly feed on producers, carnivores, and herbivores, a reason why they are almost found in every trophic level in the environment.

They contribute to the energy cycle of the environment. This is because they are eaten by secondary consumers, thereby giving them energy. They are also responsible for removing dead organisms that can cause diseases or infections.

A decomposer is a type of organism that can break down a dead organism. The organisms embrace the role of decomposition of dead decaying matter, which is an essential phenomenon in the environment. They also recycle organic substances that may be in the ecosystem. The primary examples of decomposers are the fungi like bacteria and mushrooms.

The process of decomposition is a long one and has various stages. If an organism dies, it will go through five stages of decomposition, namely fresh, bloat, active Decay, advanced Decay, and dry/ remains. The two essential processes necessary in the decomposition process are putrefaction and autolysis.

Autolysis is a procedure where the cellular enzymes of an organism tear down its cells and tissues. On the other hand, putrefaction is a process where the microbe reproduces and grows in the organism’s body. The five stages of decomposition are:

Difference between Detritivores and Decomposers

Decomposers help to break dead organisms. They are of three types, namely scavengers, saprophytes, and Detritivores. Decomposition is essential in attaining eco-balance in the environment. The two organisms are somewhat confusing because they feed on dead matter and are heterotrophic; they, however, have distinguishing features that make them unique.