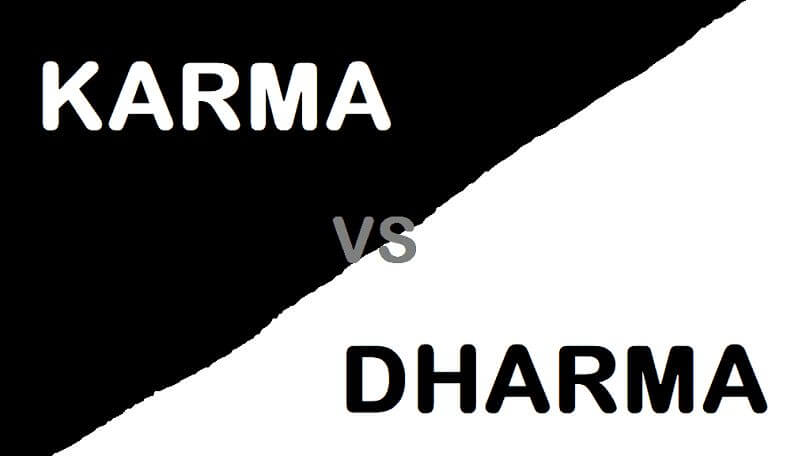 Every religion and belief focuses on the principle of advocating for human society, thus creating a better path when it comes to divinity. The same applies to the Indian culture, which features different beliefs and mythology. This includes Buddhism, Jainism, and Hinduism, among others. With each belief, there is always a way to reach the divine. The set of responsibilities and duties to be followed is the only sure way to reaching eternity.

However, spirituality is not only confined to Hinduism. Therefore, it is essential to keep in mind that the principles of life are vital in every religion and belief. This is because human life is majorly based on two primary principles: Dharma and Karma.

The main difference between Dharma and Karma stands in the fact that dharma is simply birth-related while karma focuses on the deeds of a human life. However, they both lead to one path, which is salvation.

Dharma is believed to be a set of responsibilities and rules that helps in creating a proper life functioning and balanced way of living. With Dharma, the definition will highly depend on the different beliefs such as:

Therefore, the conception associated with dharma will differ from one religion to another or from one individual to another. At times, what a community might consider dharma can be Adharma to another community or individual.

A good example is eating flesh. To a certain community or person, eating the meat of an animal so as to sustain a balance in the food chain is considered as a dharma. However, the same will be regarded as Adharma by another person or community as killing animals is against humanity.

The highest dharma is, therefore, to achieve spiritual understanding. Due to this, dharma can easily be considered as the path towards device paths. However, dharma also has certain boundaries that human beings are supposed not to cross. Going beyond such limits is what is considered as dharma.

Dharma gives life its meaning, a reason why it is essential.

In Hindu holy books, there is the mentioning of dharma, with Lord Krishna being mentioned as one of the best dharma preachers as highlighted within the Mahabharata epic. The main goal of dharma teaching is to be on the right divine path. An individual that follows the right dharma path is a pure soul.

Dharma is based on human grounds that emphasize nonviolence, truthfulness, and generosity with the basics of spirituality that make an individual a better society asset.

Nevertheless, most people usually misinterpret dharma leading to social divisions. The fact that dharma paths are different for an individual or society, the destination is always the same: to be the best human with a pure soul to reach divinity. In kalyug, dharma is mainly associated with the spiritual than the humanitarian concepts.

Karma simply refers to the actions or the results of a person’s action. Karma is therefore bound to both the individual’s future, present, and past life. It features no rules and has no specific path that needs to be followed since everything counts. Karma also has no teacher.

Karma is actually the continuity of birth and death cycles. It, therefore, means that until the soul is pure and has settled all scores of both the good and bad karma, there is no chance of liberation. Each pleasure and pain is due to karma. Karma is also not confined to the bad deeds only.

Liberations, also known as moksha, is only achievable when karma is completed. This is due to the fact that karma is only dependent on all your needs during your lifetime.

The fruit of karma is not punishment but the consequences of your inner intentions. Karma is not just what you deed or do but also the intentions that are behind your good or bad deeds. It is also important to note that human acts are focused on just humans and other living things, including animals.

Karma being a human life cycle makes it possible for only a few people to achieve liberation fully. Nevertheless, death and birth cycles will continue for years. However, you can break the cycle by asking god’s forgiveness for the karma according to the mythology of the Hindu.

Karma, therefore, features a single meaning irrespective of belief or even religion. This means the karma concept has no misinterpretation.

Difference between Dharma and Karma

Both dharma and karma are considered as vital human life principles. Without them, salvation would not be possible. They are therefore intertwined, meaning they are both interdependent. An individual has to abide by karma while at the same time remaining within the path of dharma.

Even though they feature different theories, they both advocate for one ultimate goal to reach the divine path. They both focus on generosity, truth, humanity, and non-violence. Through following dharma and with a better karma score, the heaven’s gate will easily open.

If dharma and karma didn’t exist, then there would be no meaning to human life.