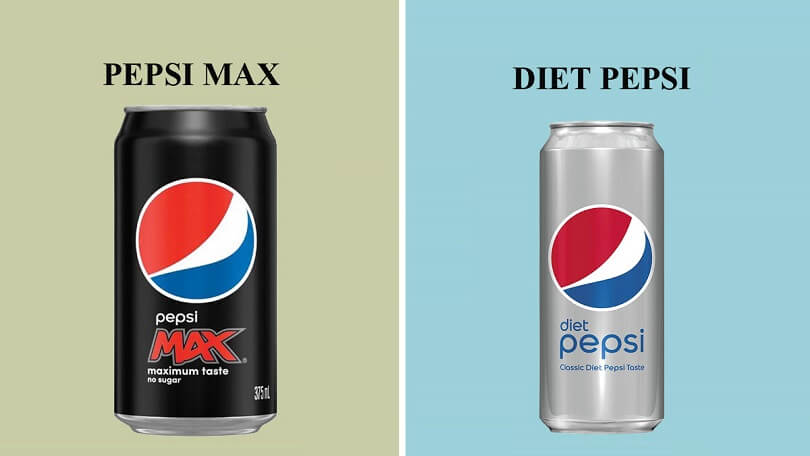 No human on earth will want to miss the fun and joyful feeling that comes with drinking a perfectly made carbonated drink. Nevertheless, the high health risks associated with sweetened beverages have become a significant setback for soft drinks producers.

This has led to the reformation of carbonated drinks that have become a common alternative to counter different health-related challenges. One of the majorly and famously known soft drink manufacturers as Pepsi or Pepsi-Cola has introduced a Diet Pepsi and Pepsi Max to compete with other drinks in the market. Both two soft drink types have been keenly concocted to ensure that they are not harmful to human health.

The main difference between Diet Pepsi and Pepsi Max lies in the fact that Diet Pepsi only uses aspartame. At the same time, Pepsi Max uses both aspartame and acesulfame potassium. However, Diet Pepsi features higher aspartame content.

Another vital difference comes from the marketing plan where Diet Pepsi was advertised as a zero-calorie drink that is carbohydrate-free. On the other hand, Pepsi Max was launched to the market as a low-calorie and carbohydrate content drink.

What is Diet Pepsi?

Diet Pepsi is considered a Pepsi Max alternative launched to the United States market in 1994. The main reason for introducing this drink was due to the high presence of Acesulfame content in Pepsi Max. at the time, Acesulfame was not allowed or recommended for human use within the United States. It, therefore, made more economic sense to the company to develop a new drink other than making changes to the already existing product.

Besides being without Acesulfame, the new product also had no carbohydrates and calories, which gave it a competitive step in the market. Nevertheless, not everything about Diet Pepsi stood out as it had a higher Aspartame amount that reached up to 111mg. It was also considered to have a weight gaining capability even though it had zero calories. This made the drink a disadvantage for people with diabetes.

In Canada, Diet Pepsi was introduced in the year 1983 and managed to circulate the country by using a Pepsi Light name, making the drink have heavy competition since Diet Coke was also launched at the same time.

Diet Pepsi’s main ingredients include aspartic acid, phosphoric acid, carbonated water, natural flavor, caffeine, artificial color, potassium benzoate, and citric acid. However, these ingredients slightly differed from those used to make the Canadian drink. There are also other Diet Pepsi variations, including Lime Twist and also Lemon Twist versions. Diet Pepsi, however, got badly criticized by health experts due to its obesity and heart health effects.

What is Pepsi Max?

Launched in European Countries of the United Kingdom, Italy, Austria, and Turkey in 1993, Pepsi Max was finally introduced to the United States in 2006. The delay was attributed to the Acesulfame content. Other Pepsi Max ingredients include acids, colors, carbonated water, and artificial sweeteners like aspartame, artificial flavoring, and preservatives. The drink was considered a low-calorie and carbohydrate drink.

Pepsi Max also featured a higher caffeine content of up to 43mg. Nevertheless, it had lower Aspartame content of up to 77mg per serving, with a single serving of Pepsi Max being 330ml. With years other Pepsi Max variations have emerged, each with different and unique flavors that easily attract customers.

Even though Pepsi Max has a wide variety of flavors, different aspects made Pepsi Max stand out. Acesulfame Potassium that had carcinogenic properties was one of the additions that highly contributed to the popularity of Pepsi Max.

However, it is believed that long-term use of Pepsi Max can lead to kidney failure, depression, headaches, nausea, and liver failure, among other health problems.

Both of these two drinks were purposely launched to promote a healthy twist. However, they both feature significant differences with Diet Pepsi using both aspartame and acesulfame potassium while Pepsi Max only uses aspartame.

Pepsi Max’s high caffeine content also distinguishes it from Diet Pepsi, which has a low caffeine intake making it less addictive. It is also important to note that both drinks have been associated with different health issues for long-term consumption. Some of the health issues include obesity, kidney failure, diabetes, and liver failure, among others.

However, irrespective of medical practitioners’ negative health problem claims, these two drinks have continued to dominate the market.