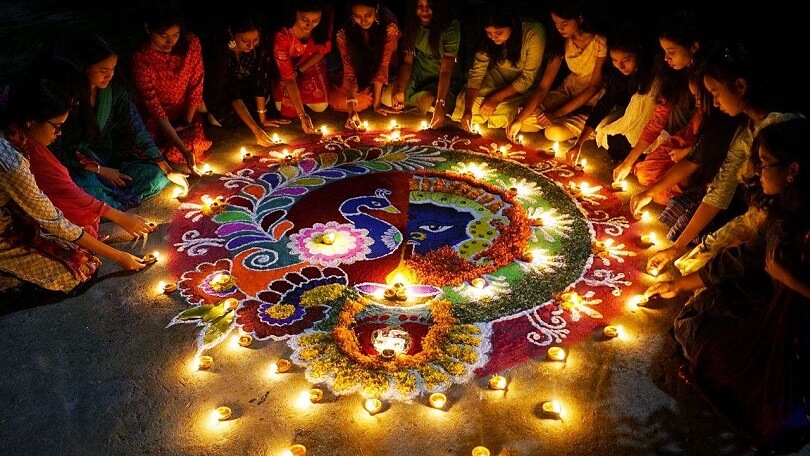 The festivals that a community celebrates, whether it is a religious community, a group that shares a common land, or any other form of group, teach us about their history and way of life. It reveals what individuals believe and how their civilization is based on those beliefs.

India is a country with a rich cultural heritage, so it’s no surprise that there are so many festivals and events taking place all throughout the country throughout the year. Diwali, also known as Deepavali, is one of the country’s most well-known festivals, which is observed not only in India but around the world. Why do all these have such distinct dates, but their methods of celebration are so similar, is a popular question.

Diwali is the ceremony, which is celebrated in most northern Indian states. This event commemorates Lord Rama’s return from exile. This is from the epic Ramayana, in which Lord Rama was exiled from his father’s realm in Ayodhya while still a prince. He arrived with his wife Sita and brother Laxman after fourteen years had passed. To commemorate the homecoming of the excellent monarch, diyas (little clay lamps) were lit throughout the kingdom’s villages and capital city.

Choti Diwali, Dhanteras, Lakshmi Puja and Diwali, Bhai Dooj, and Govardhan Puja are the five days of this celebration.

Dhanteras commemorates Lord Dhanvantari’s birth. Lord Dhanvantari is known as God’s Physician. The Devi Lakshmi is revered and worshiped for success and wealth on this day.

Diwali, the most important holiday in this cycle, falls on the third day. This marks Lord Rama’s return to Ayodhya following Ravana’s defeat. Goddess Lakshmi also came from the ocean of milk on this day, hence Lakshmi Puja is held on this day.

The fourth day commemorates the mythological incident in which Lord Krishna rescued the villagers from floods. Lord Indra had sent down torrential rains that flooded the land, but Lord Krishna had shielded his followers by raising the mountain Govardhana with his little fingers.

Bhai Dooj, the 5th day, is a festival between siblings in which sisters wish for the well-being of their brothers. Gifts are given by the brother to his sister.

This is the central theme of Diwali including all the celebrations that occur during this time.

Deepavali, like Diwali, is also a festival of lights. It does, however, differ from Diwali in a few ways. Ashvina Krishna Chaturdasi is the first day of Deepavali. In Hindu mythology, this is the battle in which Lord Krishna, the Dwapara Yuga’s incarnation of Lord Vishnu, battles the demon Narakasura. He was the king of the demons.

There are a number of festivities around the time of Deepavali, similar to Diwali. Lakshmi Puja, Deepavali,Yama Dvitiya and Kartika Suddha Padwa,  are the four festivals.

As previously stated, Deepavali is the celebration commemorating Lord Krishna’s victory over the demon king Narakasura. People bathe early morning on this day when the very first sun rays are visible and the sky is still full of stars.

Lakshmi Puja is held on the second day. On this day, Devi emerges out from kheer sagar (milk sea), much as she did on Diwali. She is revered as a goddess of wealth and success.

Bali Padyami is another name for the Karthika Suddha Padwa. This represents Lord Vishnu’s entrance on Earth as a Vamana (dwarf) and his victory over the demon ruler Bali.

Yama (God of Death) feasted with his sister on the 4th day, Yama Dvitiya, and she put a tilak on his head for his well-being. Sisters, too, apply a tilak on their brothers’ foreheads to pray for their health.

Difference Between Diwali and Deepavali

Both of these holidays have a lot of similarities and have a lot of meaning for people all across the world, not just in the country.

This demonstrates the cultural cohesiveness that the citizens of this nation cherish. These festivals are significant for us because they remind us of the importance of history and family. It also allows us to enjoy ourselves and take regular breaks from the routine of daily life.