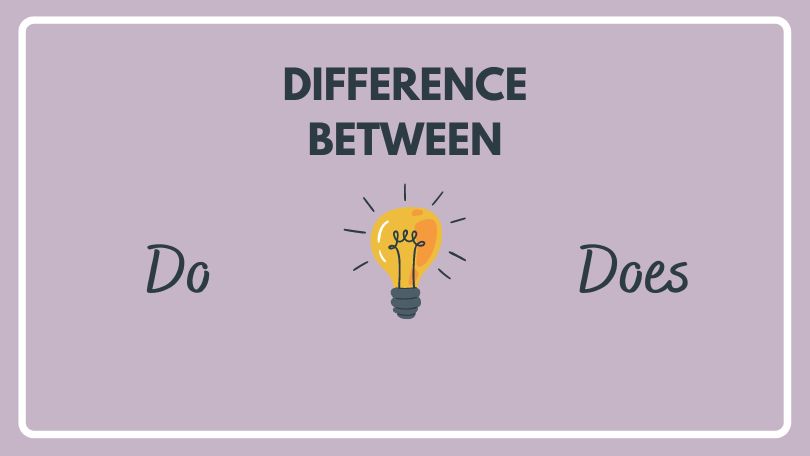 In the dialect of English, the verb ‘do’ and its conjugate ‘does’ play an important role. After BE, it’s the 2nd most significant verb.

A student’s understanding of the forms of the verb ‘Does’ and ‘Do’ is essential for using them effectively while constructing a sentence. Do is generally used as the helping verb, also its primary purpose is to generate questions and negative phrases.

The primary distinction between Does and Do is: Do can be used as the helping verb in the simple present phrases with first and third-person & singular and plural nouns, while Does is only used with nouns that are 3rd-person singular.

Do can be used with 1st singular, 1st plural, 2nd singular, and 2nd-person plural nouns, as well as 3rd-person & plural nouns in a sentence. Does is exclusively used with nouns in the 3rd person singular. Does is simply a conjugate form of ‘do’, with a similar definition as ‘do’, but with the addition of ‘-es’.

In the simple present tense, the use of the term do as the main verb in any sentence is quite rare. Its primary purpose is to demonstrate who or what conducts an activity or a routine action.

In some affirmative statements, the word ‘do’ can be employed as a helping verb to create a contradiction.

When to Use Do?

The term Do is a common transitive verb in English, with meanings such as  “carry out”, “to perform”, and “to execute”, among others. When referring to something, a transitive verb ‘do’ is used to convey an individual’s behavior in response to another individual’s demand or on his or her own initiative.

When used in a sentence, the transitive verb ‘do’ involves the direct subject and also an object. “Can you do this job?” is an example where “you” is the subject and “job” is the direct object that explains what has to be done.

In some circumstances, the verb do is also employed as an assisting verb to minimize repetition. “The assignment allows them to go around and play like children”. The word ‘do’ is used to emphasize both the present and past tenses, as in the following example: “Please do be on time”.

“I do hereby proclaim that my assertion is true”, for example, is a common use of do in legal statements and papers. Do is a verb that is used to make inquiries with personal pronouns in the present simple tense. “Do I get a piece of cake as well?” ”

When to Use Does?

The conjugation of the verb ‘do’ is known as ‘does’. The word ‘does’ means to undertake, act, or accomplish any task or activity, whether at the request of some other individual or on one’s own initiative. In simple present sentences, does is employed as a transitive verb with 3rd singular nouns to construct various types of sentences.

Does could be used to make interrogative phrases seem accurate and relevant.

To emphasize the negative aspect of a sentence, the word does can be employed in the construction of negative sentences.

Does could be used to give a sentence’s main verb a little extra oomph.

To give the verb a bit more emphasis, the word does is employed in the formulation of tag questions.

Difference Between Do and Does

The language is English is built on the foundation of grammar. To produce accurate sentences, one must understand the proper usage of the various forms of the verb in English. ‘Do’ is among the most commonly used forms of the verb in the English language, and its conjugation, ‘Does’, has its own set of rules and functions.

In the present tense, ‘do’ is mostly employed as a helping verb or transitive verb. ‘Do’ works with most plural and singular nouns, whereas ‘dos’ only works with 3rd-person & singular nouns. We can utilize them accurately and with more confidence if we grasp the distinctions.