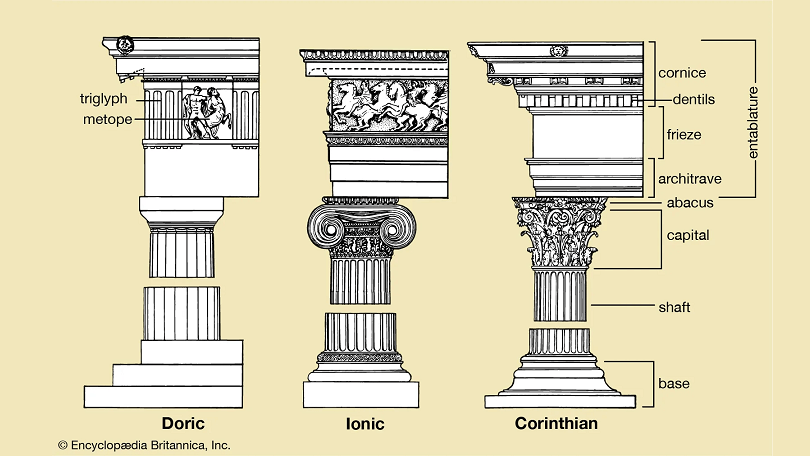 The Doric design is the simplest and was created predominantly in the 5th and 7th centuries. It was developed in the western part of Greece. What makes the Doric style unique is that their columns have no basis. The architecture is heavy short, and sturdy. Its height is between 4-8 times the diameters of a column. The design axis is striated with twenty flutes, and the capital is flared and simple.

One peculiar thing you will see about the Doric style is that it lacks decorative elements. Its entablature is categorized into three horizontal registers. The bottom is always smooth or can be categorized by horizontal lines. Its frieze is categorized into triglyphs and metopes. A triglyph is a unit comprising of 3 vertical stripes, which are separated by grooves. The moths are usually carved or flat reliefs.

On the other hand, Ionic originated from the eastern part of Greece in the 6th century BC. The columns are high and thin. The unique thing about their column is that it scrolls at the top called parchments. The columns are thin, striated pillars with a large base plus two opposing scrolls in the capital. They have 24 flutes on the axis, and the shaft is thin at the top and wide at the bottom. Their shaft height is eight diameters.

The Ionian entablature has three stepped bands referred to as fascias. Frieze Ionic does not have metopes and triglyphs, but it has continuous ornaments like figures carved in bas-relief related to historical events and myths.

What is Doric Column?

Doric columns were created in the 7th century. It was created to replace the previous style that was a bit basic and of wood structures. The style was first seen in Greece and started to grow in other parts of the world until 100 BC. The style is the primitive and simpler version of these types of architecture.

They have no base and are built to support the weight of a ceiling. They are short, sturdy, and heavy, and their height is between 4-8 diameters in the column. The style has 20 flutes, and its capital is simple and flared. Its capital comprises two elements: circular bottom referred to as echinus, topped by a square called abacus.

Its entablature is categorized into three horizontal registers. The bottom part is smooth, or some are divided into horizontal lines. The frieze is simple with vertical lines called metopes and triglyphs. The metopes can be plain or come with decorated statues of heroes and Greek gods. For example, various contemporary Greek structures take this order, the Parthenon on the Athens Acropolis.

This style is of two types Greek and Roman. The Roman Doric architecture is quite similar to the Greek except for two things;

What is the Ionic Column?

This architectural style came from the eastern part of Greece. It was seen and was famous for scroll in its capital called volutes. The Ionic order is nine-fold in the lower diameter and a shaft of 8 diameters high. It is famous for its graceful proportion.

They are the tallest and thinnest columns. They measure slender fluted pillars that have an outsize base with two opposing volutes in the capital. The shaft has 24 flutes. The temple of Athena located in Athens’ Acropolis is an example of an Ionic column.

The entablature is the architrave, the cornice, and the frieze. They are long bearings that support the weight directly above the column. The frieze is stripped above the architrave. The cornice is the top weight-bearing part that juts outwards. Pytheos and Hermogenes are some examples of ionic columns.

Difference between Doric and Ionic Architecture

This classical architectural style was developed in the 5th and 6th centuries. The Doric column was the primitive and most straightforward version of the Greek order. You can easily recognize it from its circular capital, which is on top of its columns. On the other hand, the ionic column came later and was unique when it comes to its capital, which was rolled up cushion-like form that is on the side forming the volutes.