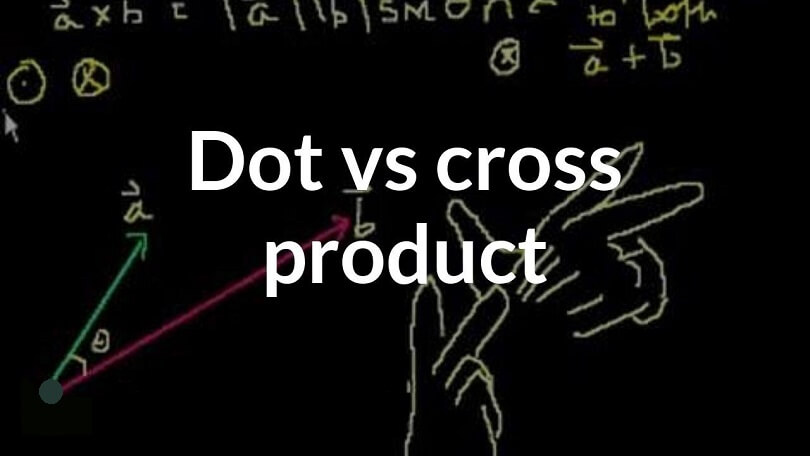 Mathematics is an important part of everyday life as well as a core integral of a lot of Math-related subjects such as Physics. It helps in the analysis of a lot of different problems and helps to simplify calculations and when it comes to learning spatial concepts. A vector is a quantity that has both direction and magnitude, which means that it is especially helpful in determining the position of a point relative to another. On the other hand, its counterpart, the scalar quantity, has no direction but only magnitude.

A vector can be used in two operations which are the dot product and the cross product. And while they may look the same or at least feel similar to one another, they are actually very different from one another. Finding more about them will help you learn about when and how you should use each.

A dot product between two vectors is known as a scalar product. It is the result of the magnitude of two vectors that are involved together with the cosine of the angle that is between the two of them.

On the other hand, across product between two vectors is known as a vector product. This is because both magnitude, direction, and the sine of the angle that are formed between the two vectors are considered in getting the product.

While these might not be that easy to understand without basic knowledge of algebra and geometry, the two are different from each other, so it is important that you learn more about them before you decide to use them.

What is a dot product?

It is normally represented as A⋅B = AB cosθ which results in a scalar quantity because it only has magnitude without direction. The cosine of the angle that is needed for calculation is taken when both of the vectors have been aligned in the same direction. By doing this, it is much easier to obtain the projection of one vector over another.

Dot products are known to follow the commutative law, which means even when the position of the vectors is interchanged, the answer will remain to be the same. It also follows the distributive law, which means that when getting the dot product of three or more vectors, changing the grouping of the factor will not change the product.

Another thing that it follows is the scalar multiplication law which means that when a factor is multiplied by two or more vectors and is distributed between them, the answer would remain to be the same.

The dot product has a lot of different applications, and one of them would be to find the distance between two points within a line. Finding the projection of a point is another important thing that a dot product is able to do.

What is a cross-product?

The cross product does not follow the commutative law, but it follows the distributive law as well as the scalar multiplication law. It also comes with a lot of different applications, some of which are to be used to determine if vectors are actually coplanar. Another thing would be that they used to find a specific distance between the two lines.

Vectors can be a tough topic to be introduced into, but when you learn more about it and give it time to learn, it is not as hard as you think. The dot product and the cross product are some of the basic things that you would need in order to study further. The cross product and the dot product will be helpful to you later on. The concept of the vector itself is a very old concept but has continued to improve because of all the innovations in mathematics and other fields of sciences.