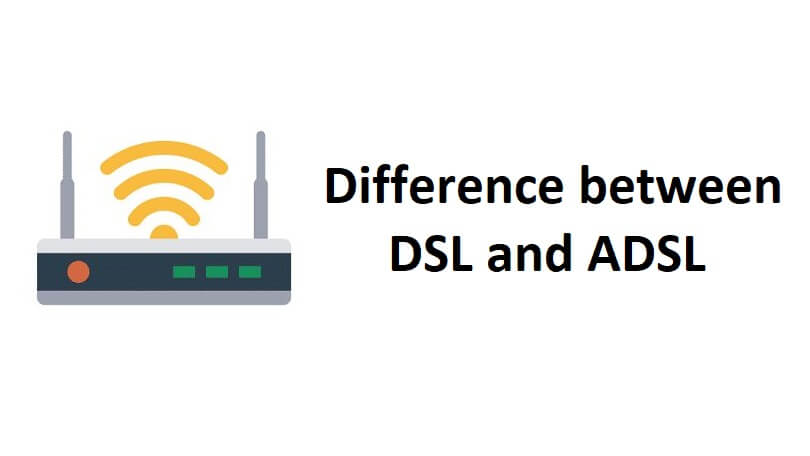 In the modern era, technology is one of the most important things because almost everything depends on it. This is also the reason why the internet is a necessity that is being used all over the world these days. This brings DSL and ADSL to the table. They are the most used form of internet connection: broadband internet and it is the most convenient type to use as it is efficient and has a high speed.

The two broadband internet connections that have a high speed are DSL and ADSL. DSL means Digital Subscriber line, whereas ADSL means Asymmetric Digital Subscriber Line. Using both does not automatically mean you will need to upgrade your telephone line as they do not stand in the way of your telephone service, which means to say that you can use them regardless of the telephone subscription that you happen to have.

Although they happen to be very similar, with just a letter difference, it is important to learn more about them so that you can figure out which one you would need better.

The main difference between DSL and ADSL would be that DSL represents the internet and makes use of the relation between a phone line and a modem. Meanwhile, ADSL is the data sending speed which is also known as upstream, as well as the data received, which is known as downstream. It is important to understand more about them so that you can learn more about how they work.

DSL is a family of technology that is used in transmitting digital data over telephone lines. It is a service that can be delivered together with a wired telephone service which is why most data providers would also offer a telephone service. It uses high-frequency bands on non-DSL outlets to block different types of interferences.

ADSL is where the data output is where the upstream direction happens to be lower, and thus, it is known as the asymmetric service. It is quite similar to DSL since it is part of the family, and yet it has its differences at the same time which is why it is quite interesting to learn more about both of them.

The full meaning of DSL is the digital subscriber line, and it represents the services that provide the different internet connections with the use of a modem as well as an existing telephone network. A lot of different companies that offer DSL connection offers a telephone network together with it.

Its main benefit would be that you can use the internet connection even when you are calling someone else as they work together in terms of frequencies so you can be sure that there will be no interruptions whatsoever. The main problem is that the telephone network is a necessity if you want to have high-speed internet, and the farther you are from the telephone network, the less speed your connection is gonna have. This very reason is why services that offer DSL would offer to have it with a telephone network.

Telephone copper wires normally have a high number of frequencies, and only a small amount of them are used for telephone communications, so it is possible to use telephones with DSL modems simultaneously without any problems.

The major advantage of DSL would be that it is easily and readily available as it is built on existing telephone lines. It also helps that the cost is less versus broadband and satellite connections, and you can use the internet even when you are making calls at the same time. The disadvantages include that it needs to be near a telephone connection to be on high speed and it costs more than other types of connection.

ADSL means asymmetric digital subscriber line, and it is a technology that offers high-speed internet connection using telephone lines. It is a type of DSL where the download speed is faster than the upload speed. It is a famous type of broadband, and it can be connected with existing telephone lines. It is very easy to use, and the sign-up comes with very minimal charges.

When using ADSL broadband, a microfilter is put into the phone connection, and it splits up the frequency of the phone line. Through the help of the microfilter, the web can be used even when chatting on the phone. It is of the high-quality type, and it comes with a good internet connection. Accordingly, though, the farther you are from the telephone network, the slower it gets.

Difference Between DSL and ADSL

The major difference between ADSL and DSL would be that the upload and download speeds of ADSL are asymmetric while DSL is symmetric. ADSL is a type of DSL, and in the modern world where the internet is impossible to live without, knowing the difference between the two is a necessity.