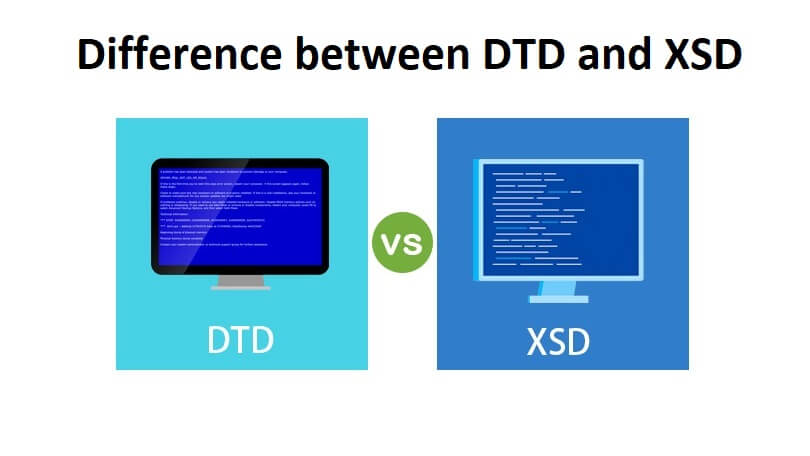 Most machines that clients use require getting data from their server, and XML is a good and effective method to fetch them. And while DTD and XSD are related as markup languages for XML, they differ from each other in a lot of different things. Learning more about these differences will help you more in figuring out what you should do in the process.

The main difference between DTD and XSD would be that DTD has less control while XML has better control over XML. DTD is normally utilized to define the structure of XML, while XSD is a way to describe its content and structure.

DTD stands for document type definition and is a type of document which is used to define the structure of XML. The attributes that the XML language has can be defined by DTD in a precise manner. It can be classified into two parts which are the internal and the external DTD. The grammar and the validity of the structure of an XML document can easily be checked using the DTD.

On the other hand, XSD, which stands for XML Schema Definition, is a way used to describe the content and the structure of an XML document. XD was first published way back in 2001 and was brought back again in 2004. The rules for the attributes as well as the elements of an XML document can be easily defined by XSD. Both correctness and vocabulary of the XML file structure are checked by the XSD.

DTD is known to be derived from the SGML syntax or the standard generalized markup language syntax. It does not support any data types and namespace, and it has less control over XML. It is also not extensible.

A person that uses DTD cannot strongly type using it, although it acts as an extended version of XML sometimes. DTD has a high learning curve, so it will take some time to learn about it and actually use it. DTD is a declaration that helps define document types for both XML and SGML. It is important to learn about it so that one is able to understand when to use it.

XSD is known to stand for XML Schema Definition and is a good way to describe the content of an XML document. The rules for the attributes and the elements of an XML are defined using XSD. It is normally used to check the correctness and the vocabulary of the XML file structure. XSD has two types which are the simple and the complex type. The simple type XSD allows text-based elements and has fewer attributes, child elements and cannot be left to be empty. On the other hand, the complex type of XSD is known to have multiple attributes and elements. It also comes with sub-elements but also cannot be left empty.

XSD is used for writing XML, and it supports both namespace and datatypes as elements and attributes. XSD is known to be extensible and gives the user better control over the XML document. It is used to precisely describe the elements that are in an XML document. Learning how to use XSD is relatively easy versus learning DTD as there is no new language needed to be mastered.

Difference between DTD and XSD

DTD or the document type definition and the XSD or the XML Schema definition are related to each other through the same language markup, the extensible markup language, or the XML, and yet they differ by a lot of different attributes.

DTD is a type of document used to define the structure of an XML file, while the DTD is used to derive the validity and the grammar of the XML file. DTD is derived from the SGML and does not support namespaces and datatypes.