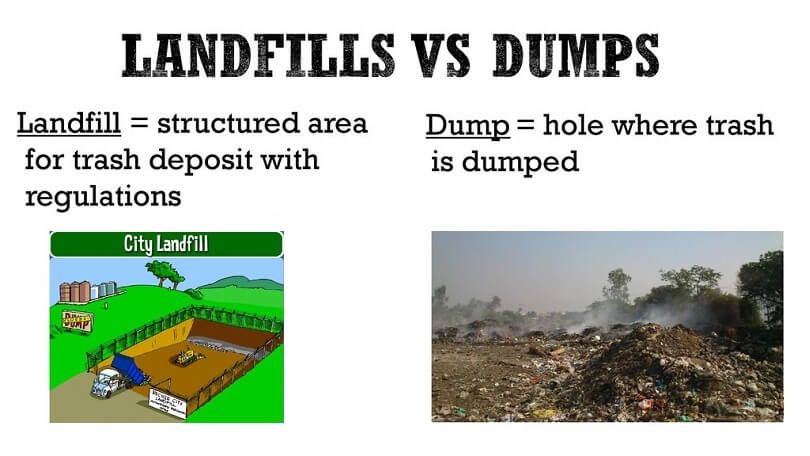 Protecting the environment should be everyone’s duty, but it is often so ignored that nature is complaining through a lot of different natural disasters. Reducing plastic usage or planting more trees should be prioritized, but it can still be pretty hard to accomplish. One of the hardest things to have control over would be waste management. When the trash can gets filled with garbage, how are you going to dispose of it? What happens to the materials that the garbage truck collects on a daily basis?

Garbage control is one of the hardest things to do, and they are normally dumped or placed in a landfill. The garbage trucks go to landfills and throw them there. There are also places where people dump their garbage. It seems that dumps and landfills are often confused with each other because they tend to look the same. However, they are actually two different things, and once you learn more about them, you will never mistake them again.

The main difference between a dump and a landfill would be that both of them are excavated pieces of land, but landfills happen to be regulated by the government. This means that the government has control over it. Landfills also have a liner at the bottom of them so that they can catch any liquids that are produced by the solid wastes that are in them, while most dumps do not have that at all. Dumps come with no interference from the government and are often not covered by mud or sand, which makes their odor spread in the air. Both of them are hazardous in their own way, and that is why you need to be careful of going near them.

What is a Dump?

A dump is a piece of land or a place where garbage and materials get stored. You must have seen one in your life before with the amount of garbage that gets produced on a daily basis. It is one of the most polluted places in the world. With the increase of population comes an increase in garbage which makes them harder and harder to dispose of. This is why it can be pretty hard to know where to store the waste materials and garbages around you.

Thus, dumps are excavated to throw garbage in, and most places have them. They are found all over the world, and people would empty their trash cans at home directly at those places. However, dumps should be handled with care, but not a lot of people give attention to them, despite the fact that they can be pretty dangerous to the health as there is no one to maintain them.

Being near the dumps is a very unhealthy choice, but for many, they do not have a choice at all. However, it is important to make sure that there are steps taken to avoid dumps from spreading diseases. To prevent the rotting smell from filling the air and spreading diseases to the community near it, it should be covered using mud or soil.

Covering the dump helps to reduce the spread of diseases, prevents the bad smell of rotting things, and more. As there are materials inside dumps that do not decompose even after a long time, they can produce toxic gases, and spreading them in the air can be very dangerous. Dumps do not have any lining that collects liquid created from solid materials that do not decompose, and they are not controlled by the government either. Thus, there is no processing of garbages in it at all.

What is a Landfill?

A landfill is a piece of land owned and regulated by the government. It gets excavated for the sole purpose of storing garbage in it. Waste materials are thrown in it and covered with soil and mud to prevent the rotting smell of the garbages from being out in the air. There are steps and measures taken by the government to maintain the place. They come with liners that would prevent the liquid that gets produced by solid materials that do not rot so that it would not enter any water supply. This is a great step to prevent harm for any community near it.

Difference between Dump and Landfill

While both dumps and landfills look and seem the same, they are actually very different places. Dumps are not controlled by the government, while landfills are, which is why it has a lining at the bottom and gets covered in mud and soil. It is important to know that they are both toxic and dangerous to health, and that is why they must be maintained.