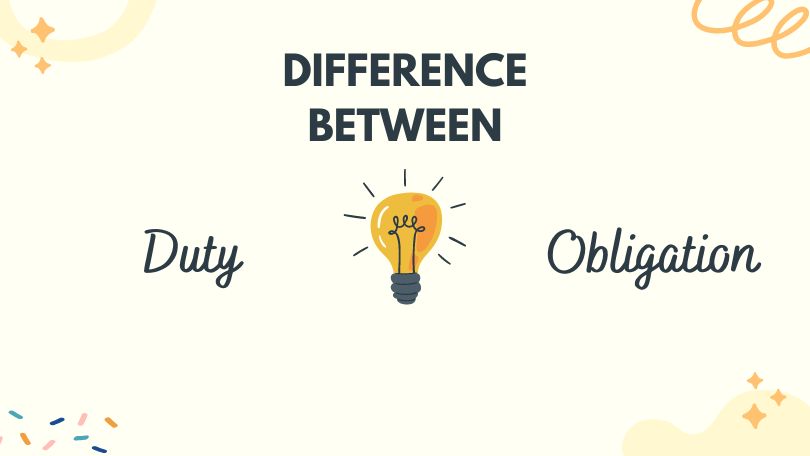 Along with the majority of words in the English language, Duty is restricted to a specific use case so that there is no confusion with other words related to Obligation. The two criteria by which you can distinguish duty from obligation are located in the root or origin of the word. They also lie in our relationship with the one we owe them to.

The main difference between an obligation and a duty would be that duty arises from moral and legal needs, while an obligation is something that arises from a set of norms that focuses on maintaining order. In a professional setting, both duty and obligation are applied mutually. However, they both have differences among them that are very important to learn more about. By being able to differentiate the two, a person would be able to further understand where and when they should be used.

A duty is something that is either a legal or a moral right. It is a duty that is the same as due but more of what is expected from a person. Duties are also quite synonymous with commitments and expectations. It is an action or a task that is required from a person depending on his or her position or occupation. It is mostly used in professional settings. Simply put, it is doing something that must be done.

On the other hand, an obligation would be something that needs to be performed whether or not you like it. It is something that cannot be ignored and has to be fulfilled because you belong in society. It is something that a person can be bound to, both legally or morally. It is a debt of gratitude for a favor or a specific service. It is normally something that is demanded from a person out of a promise, of custom, or conscience. Some people would often refer to this as a burden.

The term duty would often underline a sense of morality that allows a person to be doing a specific activity. It comes with a control that accompanies a person and is often not compelled to be done by other people. The person can do it or not, depending on his will. The presence of regulations, as well as norms, is not something seen in terms of duty. It is normally seen as an expectation from the individual himself or societal demand. It is a sense of doing things in a specific manner that leads to action.

With consideration depending on where it is sourced from, the duty can be an ideal behavior that is normally stimulated through the principles that come into agreement with justice. These are duties that form behavioral authority and whatever is thought of which fits the contract that is made in terms of work settings.

The zone of duties is much broader versus obligations, and thus the similarity ends there. To illustrate English law, the duty of confidentiality is often used as a good example. A duty might also refer to something that a person owes to another person or an agreement that is done between two people.

Obligation, on the other hand, is something that can easily be defined as something that an individual should do because of an agreement, the law, or something else. A person gets bound to finish the work or task involved because of the terms and conditions he has signed up for.

A person is obliged to get involved in a lot of different things for different contexts. In the corporate world, it is something that holds a strong meaning, especially when it comes to newly assigned people at work. Once an agreement is signed, the contract would bound him through the different obligations that he must then follow.

An agreement that may include but is not limited to a lot of different duties and jobs are obligations to which an employee needs to adhere to. It can easily be seen as an agreement when the employee signs a contract in exchange for tasks for money. It is not morality that would attract employees to do their job but rather the rules that are set in the company. An obligation is something that is not motivated by someone else but rather something that you do because you need to.

Difference Between Duty and Obligation

While duty and obligation tend to look and feel similar, they are completely different from one another, and that is why it is necessary to learn about them and understand them better. A duty is something that you do because you want to, while an obligation is your responsibility to accomplish.