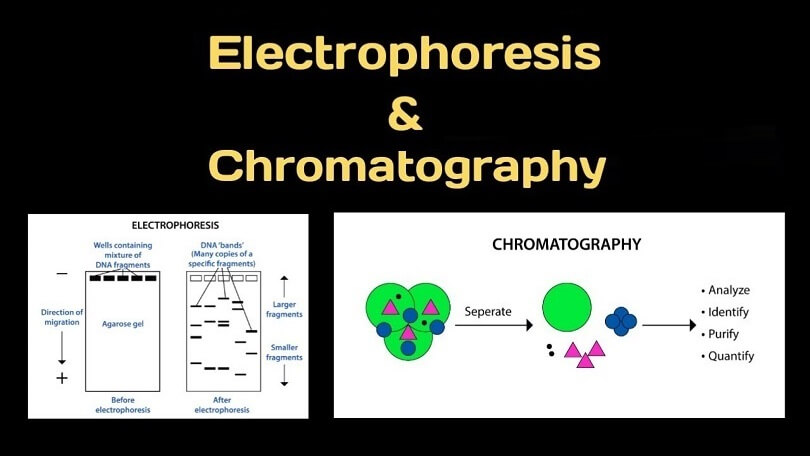 There are a lot of different kinds of laboratory techniques used in separation and in testing specific samples. In line with that, two of the most popular ones are electrophoresis and chromatography. When the sample has a large volume, chromatography would be a good choice of technique to use, while when handling samples that are microscopic in size, electrophoresis would be a better choice.

Both of these techniques are much used around laboratories all over the world, which means that learning more about how they differ would be very useful.

The main difference between electrophoresis and chromatography would be that when you use electrophoresis, you are looking into the chemical properties of a particular sample, while in chromatography, you are looking into the physical property of the species, specifically the partition coefficient. These techniques are both useful in the separation of components of a sample and identifying them. They have been put to use in various laboratories all over the world and are considered to be very popular techniques.

Electrophoresis is a technique that can be used to differentiate different components of a test sample through their chemical properties. In the sample, a person would be able to observe the motion of the particle as it gets dispersed. A person would be able to relate the motion of these chemical species from existing standard references by comparing their potential difference.

On the other hand, chromatography is used to separate samples through partition. Since every species has a specific partition coefficient, the technique is very easy to use. When you calculate the partition coefficient of your unknown sample and compare it, you will be able to figure out what substance it could be. It is also a very useful technique in separating the components of a mixture since they would get apart because of the difference in partition coefficient.

Electrophoresis is a known technique that is used in laboratories to test samples and identify them through their chemical properties. In a sample, when the analyst is able to observe the motion in which the particle is dispersed and check the potential energy of this movement of the chemical species, it can be compared to existing records.

Electrokinetic is another term used to describe electrophoresis. It has two categories that are used in order to test samples. The types depend on the ion that is present in the sample that is being tested. The two types are known as cataphoresis and anaphoresis.

Cataphoresis is used when cations are present. Cations are positively charged ions. On the other hand, anaphoresis is used when anions are present in the sample. Anions are negatively charged ions. Depending on what is present in the sample, you would be able to decide what type of electrophoresis you need to use. You would want to consider these when you are trying out this particular technique.

Electrophoresis can be used in a lot of different applications, such as in the separation of biological molecules like amino acids, RNA and DNA. It can also be used in visualizing bands of a molecular marker and more.

In the process of separating human blood, chromatography plays one of the most important roles in it. It is a chromosome technique that is used in order to separate the different components that are present in the human blood.

Chromatography uses the concept that every species has its own unique partition coefficient so that they can easily be separated and identified. It is a very useful technique that a lot of laboratories all over the world use.

Difference Between Electrophoresis and Chromatography

Electrophoresis and chromatography are two techniques that are very popular in separating and identifying different components of mixtures. While they are very different in terms of their concept, it would be important to note that they play a major part in a lot of analysis in our daily lives.