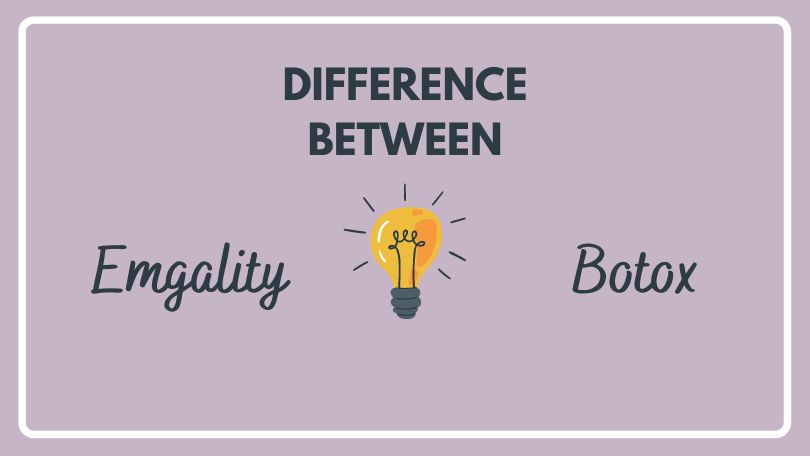 People always get confused when they come across new terminologies, and that is why it is important to learn more about them. Clearing out how one term would differ from the other helps you to understand how things work. For example, Emgality is a different medical procedure than Botox. If both of them seem unfamiliar to you, then you would need to learn about them so that you will be able to understand them better in case you ever get them one day.

The main difference between Emgality and botox would be the drug that is used in the medication process as Emgality uses Galcanezumab while botox would use botulinum toxin. Emgality also has a shorter half-life than botox, which means that botox would last longer. Emgality effects through inhibiting and counteracting the CGRP protein while botox produces a microbe that helps to reduce the wrinkles in your skin as well as cure other medical diseases by weakening the muscles or paralyzing them.

Emgality was authorized by the FDA on the 27th of September in 2018. The half-life of it was calculated, resulting in 27 days. This means that adults using Emgality to alleviate their migraine and headache pain is normal. The main ingredient that is used in its preparation is called Galcanezumab. The company that created Emgality is Eli Lily.

On the other hand, Botox was first used for the treatment of different eye muscular problems such as uncontrollable blinking, blepharospasm, strabismus, or cross-eyes. It was approved by the Food and Drug Administration around 1989. Botox has a 2 to 6-month half-life, and the average outcome that it gives lasts from 3 to 4 months. Botox is known to be a neurotoxin that is used in medicine and cosmetics.

Emgality is a brand name of a drug that is not accessible as a generic brand. This means that you will have to buy the brand name as you would not find a local and cheaper alternative to it. It is used as a prophylactic approach for treating migraines and an episodic cluster of headaches. Galcanezumab is its main ingredient, and it has been approved by the US FDA since the 27th of September in 2018. According to experts, Emgality has a half-life of 27 days.

Emgality works in a way that it counteracts and inhibits the production of CGRP protein. In adults, it is commonly used to treat migraines and headaches. It was on the 4th of June in 2019 when the drug was approved to be used in treating people suffering from episodic cluster headaches.

A prefilled pen or a syringe is used to inject this drug into the subcutaneous layer of the skin. A patient is normally given a dosage of up to 240mg for managing migraines. However, this dosage can still be lowered up to 120mg later on. Patients that are given 300 doses are there to treat episodic cluster headaches. When injected into the body, the medication inhibits the particular proteins, and it prevents any effects of the CGRP.

There are different things that you can get from Emgality, including that it helps with migraines and cluster headaches; you can also be sure that you will be getting different benefits from it.

On the other hand, botox was first licensed through the FDA around 1989 in order to treat blepharospasm, uncontrollable blinking, crossed eyes or strabismus, and other eye muscular problems. It normally lasts for about 3 to 4 months and has a half-life of about two to six months. Botox includes the production of a protein coming from Botulinum toxin, which is produced by the bacteria known as Clostridium botulinum. Botox helps in reducing the wrinkles found in the body, and it can also cure a lot of different medical issues, such as weakening muscles to help with eye problems.

Botox is mostly used and utilized in the cosmetic fields and medical fields. Botulinum toxin is known as a very hazardous toxin, and it is why it is necessary to make sure to use it right. 1 gram of the toxin in its crystalline form can wipe out more than a million users. Botox is neurotoxic, which means that it can cause any nerve damage. The chemicals would attack the neural system and would be used with the medicine that comes with it to give short muscle paralysis.

Difference Between Emgality and Botox

The pharmaceutical industry has gone through a lot of different advances and has been through a lot of products. Two of the most popular ones would be Botox and Emgality. Emgality and botox are different things from one another, and they can both be used for any type of treatment there is. Botox is mostly used to prevent the attack of wrinkles.