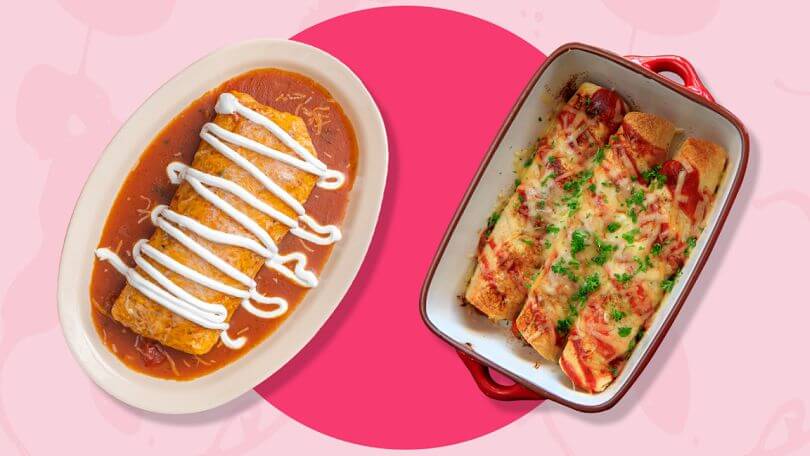 The universal language is food; it is something that people enjoys talking about and trying out. Food wraps are something that has been a trend for a couple of centuries, and modern innovations make them healthier and more interesting as time goes by. Among the famous food, wraps would be the wet burrito and the enchilada. They are both loved by a lot of people as they are Mexican dishes that come with Spanish names.

They tend to look similar to each other because of the rolled-up appearance and their sauces. However, they are nowhere the same and have different ingredients and origins. A Wet burrito is simply a burrito that has sauces on it. While there is no dry version of what is known to be enchilada, it is always eaten with savory sauces.

Whether you are a fan of food or not, learning about the difference between the two is quite interesting, and you might want to try it out once you figure out how they differ from the other.

Enchilada is a part of Mexican cuisine despite its name being Spanish. It is a rolled dish that comes with different fillings such as meats, potatoes, beans, vegetables, and more. The one thing that makes it unique would be that it is made from corn tortilla, and then its cooking process is being baked together with its sauces.

On the other hand, a wet burrito is a rolled dish whose outer covering is made up of flour tortillas, and it comes with a lot of different vegetables and meat inside. One of its main ingredients would be black olives. The sauce is not cooked together with it but added later on as desired. The Beltline Bar found in Grand Rapids in Michigan is said to be its origin.

Enchilada is simply a Mexican dish that is rolled up. The outer covering is made from corn tortilla, and inside, it would be a filling made up of different veggies, chicken, and mutton. It is baked with the sauce inside of it, which is normally chili sauce with a lot of spicy flavors. It is a very famous dish that is normally celebrated every year on the 5th of May, which is also known as Enchilada day.

The dish is customized depending on the preference of the one who will be eating it. It can even be made with the leftovers in the house, and also extra toppings and dressing can be added to it, which is good, especially for children wanting to try it out. It is completely covered in sauces which makes it a little challenging to eat using bare hands. This is why enchiladas are often served with a fork and spoon to help eat them.

It is not a new dish but rather something old and beloved by a lot of people over the years. There has been a lot of different improvements to it, such as changes in the sauces, with varieties of different sauces now available in the market. Sometimes sauce dishes are eaten together with enchiladas. However, it is still the same that enchiladas are made by baking them together with the sauce.

What is Wet Burrito?

On the other hand, wet burritos are another Mexican dish with a Spanish name. The reason for it having a Spanish name is said to be that most people in the place knew only to speak Spanish. A wet burrito is the same as a burrito except that it has sauce which is the reason it is called wet.

Burritos are basically a wrapped dish made using a flour tortilla whose fillings can be changed accordingly. Some of the common fillings would be meat and vegetable. In different countries, the fillings are made depending on the taste of their citizens, with the idea of it being rolled inside the tortilla as a concept. It is a dry dish that is often eaten using bare hands.

A burrito becomes a wet burrito when a sauce or cheese is added to it, depending on the eater’s tastes. While eating a regular burrito with hands is quite easy, the wet burrito is quite hard to eat with just hands, and thus a proper knife and fork are very much needed for it.

It is a dish that can be customized with different toppings and dressings since everything is added after it is cooked. It is commonly confused with enchilada because of the sauce.

Difference Between Enchilada and Wet Burrito

It is now easier for you to differentiate enchiladas from wet burritos so that the next time you order them from your local Mexican restaurant, you should not have a hard time trying to figure out which is which. Personalize them the way you think you would like it and be prepared to get addicted.