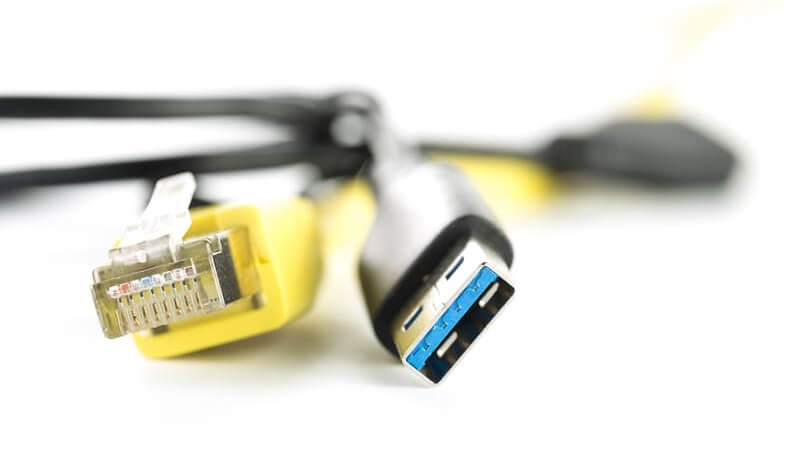 A certain type of connection between the nodes is expected to assemble devices and transport data. So far, two well-known data-transfer mediums, Ethernet and USB, have been used to do this. The connection is formed using USB and Ethernet cables and ports. Both have established themselves as well-known creations that have allowed the internet to travel the globe.

Back then, the internet wasn’t used for the same purposes as it is now. The internet was utilized to send messages and information between the military and the administration. The internet was running at a very slow pace, and the message took hours to reach the opposite side. USB and Ethernet have elevated it to new heights.

The speed differential between ethernet and USB is the most significant distinction. USB supports a range of speeds from 1.5 Mbps to 10 Gbps. Ethernet, on the other hand, offers a speed range of 100 Mbps to 10 Gbps. Besides that, ethernet doesn’t provide data transfer or power transfer, but USB does.

Ethernet is a type of local area network (LAN) that can only communicate over small distances. As a result, there are thousands of Ethernet connections around the world. However, the internet is a Wide Area Network (WAN) that allows connections to be made across countries. As a result, it is one-of-a-kind, since there is no other internet.

Likewise, USB is a local area network, and USB cable assemblies are among the most widely used and practiced cables. These are mostly used to link computers to peripheral devices such as cameras,  scanners, printers, and other similar devices.

In recent years, Ethernet has been called IEEE 802.3. Ethernet is a means of connecting computers that uses a bridge as a connector. A hub is a basic device that connects many computers to each other and to the rest of the system, allowing all linked devices to communicate with each other.

Ethernet establishes a link between nodes using  Cat 6, Cat 5, Cat 7, and Cat 6a, connections. Glass or plastic cables are available. Its connection layer can be further subdivided into two portions, such as,

Ethernet establishes connections via a LAN and generates a star topology.

Ethernet has an incredible data transport speed of up to 10 Gbps. It is a widely accepted form of the data transfer port. It is simple to install and configure. It is possible to set it at a reduced cost. It also works with network protocols.

What is a USB?

USB stands for Universal Serial Bus, and it is used to replace older ports and allow for rapid device pairing. As a networking and file transmission protocol, it employs the Asynchronous serial protocol. It can link up to 127 devices and relies on hubs to connect nodes.

Difference Between Ethernet and USB

USB and Ethernet are two types of connecting interfaces that are used to connect nodes. Ethernet has an incredible data transport speed of up to 10 Gbps. It is a widely acknowledged data transfer port format. The range of where it creates network, practicality, power distribution applications, and cost are all different.

Ethernet is twice as fast as USB in terms of speed. Multiple devices can be connected to a USB port at the same time. Cable modems are connected by Ethernet, while peripheral devices are connected via USB. When compared to the range of USB, Ethernet has a much longer network range.