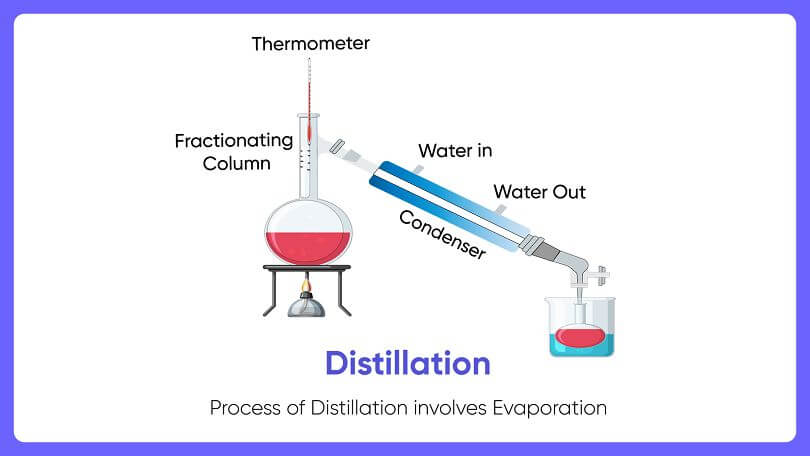 Both Evaporation and Distillation are processes in which stuff is transformed from a liquid to a gaseous state. In contrast to evaporation, distillation is the process of boiling and condensing to separate a liquid mixture into specific components and/or substances.

Evaporation and distillation begin at different temperatures, and this is the primary distinction between them. To distil, the liquid must reach the boiling point; evaporation might begin before the liquid reaches this point.. There are, of course, some similarities between the two processes, but when all the facts are considered, they are vastly different.

Vaporization has several forms, one of which being evaporation. A gaseous state may be formed when heat is given to liquid materials, resulting in its transition into a gas. Note that the gas around the substance during this procedure must not be saturated. This is important.

Desalination may be accomplished by the use of distillation, an age-old method that is both conventional and effective. When the liquid reaches its boiling point, the reaction begins. As a general rule, distillation may aid in the separation of one or more components from a mixture, increasing the concentration or saturation of the component that is present.

When one liquid molecule transfers energy to another, heat energy is also transferred. Evaporation is a mechanism in which this occurs. This gaseous state is created when an under-pressure liquid molecule that is close to the surface is heated enough to overcome the vapour pressure.

Only a very tiny percentage of liquid molecules have enough thermal energy to escape from the vaporized state, and this percentage is very small. A state of equilibrium is reached when the evaporation of liquid is equal to the condensation of liquid, and this process continues indefinitely. Compared to other processes, evaporation is a rather slow and gradual one. Even before the liquid reaches its boiling point, the process begins. In addition, evaporation occurs directly on the surface of the water itself.

One of the finest instances of the latter process is evaporation, which is a vital and critical aspect of the water cycle. In order for water molecules to be released and form water vapour, the surface of the liquid must be exposed, which results in the formation of clouds. The sun’s heat is the first step in the natural evaporation process.

Dry distillation, on the other hand, is a method in which solid materials or components are heated to a gaseous state and then condensed to liquid or solid form. Distillation is a physical separation procedure rather than a chemical reaction. Despite its age, distillation is still a very efficient method of desalination.

When the liquid combination or base reaches its boiling point, the distillation process begins. When compared to other methods of separation, this one is very fast. When using this procedure, bubbles are created out of liquid.

There are several commercial and industrial uses for distillation. Drinks with a high alcohol concentration or other fermented products of great economic value may be produced by distillation of alcoholic drinks. Cryogenic distillation is also employed in industry. Oxygen, nitrogen, and argon are separated from the air using this process.

Difference Between Evaporation and Distillation

There are many parallels between the evaporative and distillative processes, but if you look at all the examples, both have a lot of distinctions. The temperature at which each step begins and the amount of time each process takes are two of the most significant variations between the two procedures..

To begin the distillation process, external heat energy must be transferred to the liquid molecule. This aids in the gasification of the molecules. External heat energy is not necessary for evaporation, on the other hand. When the molecules collide during the evaporation process, they get energized. The liquid molecules are released, converted, and then released into a vapor or gaseous form using the same energy.