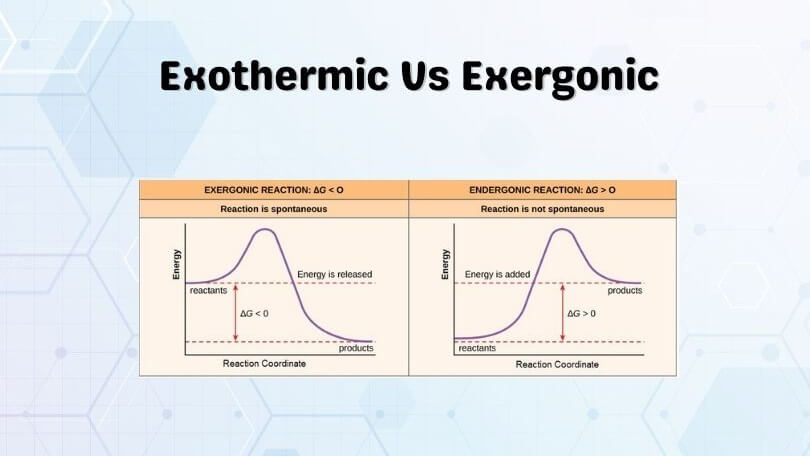 Molecules from two or more reactants (substances) rearrange to generate new substances (products) in chemical processes. The reorganization of these molecules results in the breaking or creation of bonds, which alters the amount of heat received or expelled. Chemical reactions may be characterized as exothermic, endothermic, exergonic, or endogenic based on the energy released during the process.

As opposed to exergonic reactions, which deal with the change in free energy of any chemical reaction known as Gibbs free energy, the former deal with the enthalpy changes in any chemical process evaluated in terms of heat in a closed system. Energy is released in both processes, however the sort of energy released varies.

Exergonic reactions are also energy-releasing reactions in thermodynamics. Gibbs free energy is released as a result of an exergonic reaction. Because of this, the amount of power released is also expressed as a change in entropy (energy not available to do work). As a result, the release of energy aids in the reaction’s progress and provides a degree of stability.

When two or more reactants rearrange their molecules in an exothermic reaction, energy is released in the form of heat or even light (a change in enthalpy H is also negative) as a result of the formation and breaking of chemical bonds. Joules are used as a unit of measurement here (the unit of heat). These reactions are thermodynamically stable as a result of the greater energy of the reactants. Heat must be emitted into the surrounding environment in order to liberate stored energy.

A decrease in the system’s Gibbs free energy (G is negative) results from the energy released in this reaction, which is then dissipated in the environment. As a result of this, the surrounding area warms up somewhat. Classification of reactions on the basis of exothermic and endothermic reactions quantify simply the heat emitted or needed for a reaction. When an exothermic process begins, no energy is needed. The reactants are capable of acting on their own.

Combustion is the finest example of an exothermic process. Burning any kind of material, such as wood. Carbon dioxide and water vapor, which we see as smoke, are formed when wood combines with oxygen in the air. Reaction products (wood and oxygen) produce energy in the form of heat. Heat and light are provided by the fire. Successfully, this chemical energy is converted into mechanical energy

An Exergonic reaction releases energy into the surrounding environment by rearranging the molecules of two or more reactants and creating and breaking chemical connections. This energy may then be employed to do work. It is also measured in joules since the quantity of energy consumed to do the job is the same as the amount of work done.

Energy released in this way reduces the Gibbs free energy of the system, but the energy released is employed to do some work spontaneously (G is negative) (meaning there is a change in entropy as well). H has not changed. The reaction does not need any external energy to begin.

Bioenergetic processes including cellular respiration, catabolism, and food metabolism are the greatest examples of exergonic reactions. Oxygen plays a key role in the breakdown of glucose into water and carbon dioxide during cellular respiration. As a result, the body’s cells produce ATP molecules, which power the body’s functions. As a result, it is a natural process of releasing energy.

Difference Between Exothermic and Exergonic

When it comes to their Gibbs free energy change (G and H both are negative), both exothermic and exergonic processes have enough energy to pass the activation energy barrier. However, there is a tiny variation in the amount of power they release.