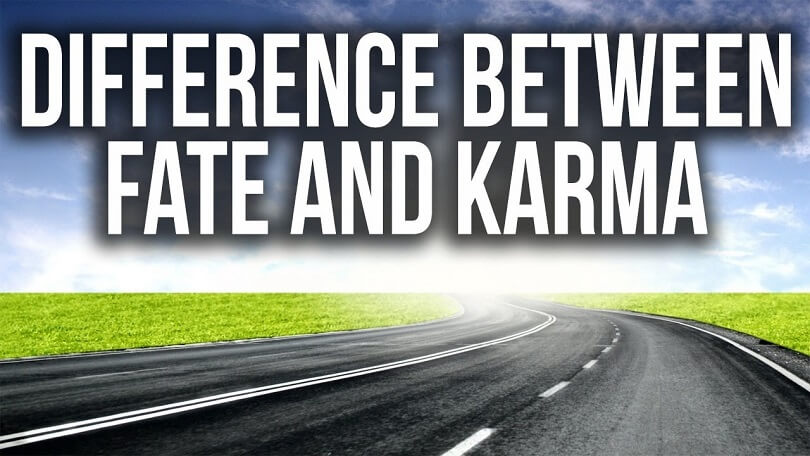 Since long ago, people have believed that there is a predefined path that governs all the moments of their lives. In these moments, fate and karma have always come up. While fate and karma may look to have the same meaning, they have slight differences.

Fate is something that has already been known to happen when that time comes. It is believed that there is nothing, not even law or nature that can stand in the way of fate. If something is meant to happen in fate, it truly will.

Karma can best be explained as consequences that will happen in one present or future as a result of their actions or choices. What this means is that good will be rewarded with good while evil will be repaid with evil. This whole concept is summed up as Karma.

Comparison between Fate and Karma

Fate can be explained as a concept of things bound to happen in a person’s life in the future. It is something that cannot be altered or avoided. What is meant to happen will happen. No possible means can make a change to fate.

Fate can further be explained as the occurrence of what has been predestined from the moment a person takes their first breath, to the moment they take their last. Every moment has already been decided before it comes to be.

Greek and Roman goddesses are believed to have weaved the threads that decide what the fate of an individual will be. It is believed that it is the Almighty who wills what the outcome of a person will be.

Fate has been accepted by most religions in the world. For example, it is God who decides people’s fate in Christianity. Moirai goddesses decide people’s fate in the Greek religion. Fatalists are people who are known to believe in fate.

Karma can be explained as consequences that are a result of one’s actions. This can best be explained by good deeds being repaid with good while bad deeds will be repaid with evil. You shall reap what you sow is a proverb that best explains the concept of Karma.

Unlike fate, an individual has control over what their Karma will be. For example, if you are sowing bad fruit, you have time to change and start sowing good fruit. This control helps save you from the ruthless consequences of Karma. Karma can be changed. Unlike fate, it can be altered depending on an individual’s choice of actions.

When one does well and involves themselves in things that are beneficial to the human race, they are rewarded with good Karma. The opposite is also true.

Karma is believed to have evolved from the Indian subcontinent but has currently spread throughout the world. It is now believed that one’s future is also a result of current deeds or actions.

Difference Between Fate and Karma

Fate cannot be changed or altered. It is decided before one’s birth what their outcome will be. It happens as a result of the will of the Almighty and therefore, nothing has the power to alter what has already been decided. No person, therefore, has a choice of altering this outcome.

Karma on the other hand gives an individual all the authority to change their life’s outcome. If you have been doing bad and sowing only bad fruit, treating humanity unjustly, you can change. A change for the better is possible which in the end will help you receive good fruit.