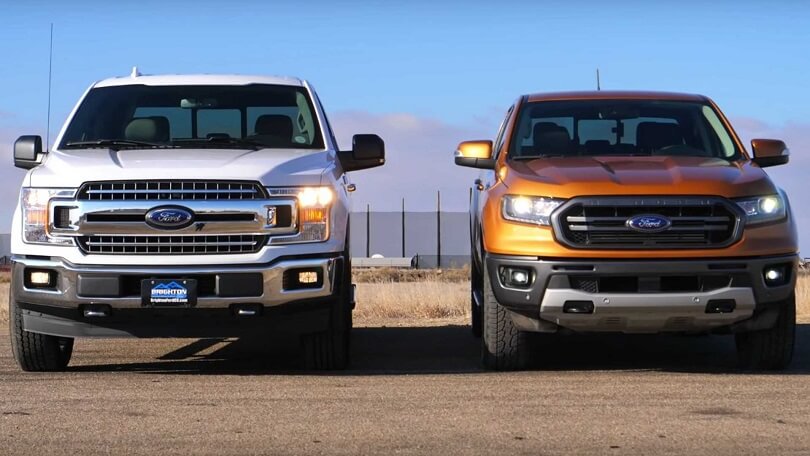 Henry Ford founded the Ford Motor Company. It has its main headquarters in Dearborn, Michigan. The Ford Family has full control of the Ford Company. It has joint ventures with other big countries such as China, Thailand, Russia, Taiwan, and Turkey.

The Ford Trucks are best known for their rugged capability and outstanding performance. Ford kept introducing new Ford models year after year. This is the reason they kept getting popular.

The Ford F-150 and the Ford Ranger are two very different models in the Ford Family. Not every big vehicle works well. This has been the perception of many. That as long as a vehicle or truck is big, it will seamlessly perform everything that is heavy-duty.

The F-150 trucks are preferred over the extremely big vehicles. They perform better. The Ford Ranger on the other hand is smaller but the F-150 is ahead of it in terms of performance.

Truck owners always know what it is they are looking for in the trucks they are looking to purchase. When choosing a perfect vehicle, though different, the F-150 and Ford Rangers become the absolute best choices.

Comparison between the F-150 and the Ford Ranger

Ford F-150 is one of the series in this family that has continued to get extremely popular. It is highly preferred due to its ideal big size. The F-150 comes in different sizes, styles, powertrains and is equipped greatly with a good capability.

A few styles of the F-150 include; Base LX trim, XLT, Lariat, King Ranch, Platinum, Fully Loaded trim, and the Raptor off-road. The F-150 has a total of six engines. It can haul up to 13,200 pounds. This alone helps to meet most needs of the user.

While the F-150 is not a perfect truck, it is better in terms of space and size when compared to the Ford Ranger. It has good crash test scores with active safety features.

The F-150 has been used in many active environments.

What is a Ford Ranger?

The first Ranger in the Ford family was introduced in 1983. The Ford Ranger falls second to the F-150 in terms of popularity in all of Northern America. In markets where the F-series trucks are unavailable, people prefer to use the Ford Ranger.

For people who prefer trucks of convenient sizes, the Ford Ranger would be an ideal choice. It has a decent capability, style, and equipment. It is easier to fit into garages and packings because it is small.

Two different styles that the Ford Ranger comes with are a four-door extended cab with a 6-foot bed and a large crew cab with a 5-foot bed. Its interior does not support smartphone or touchscreen software because it is made of plastic.

The Ford Ranger is a good investment as it comes with automatic braking, a USB port, and some powerful features.

There were 27 specially equipped Ford Ranger trucks introduced in 1984 and delivered to over 25 companies in the US, Canada that deal with natural gas.

Difference Between the F-150 and the Ford Ranger

In conclusion, both the F-150 and Ford Ranger have been built to meet the different needs of different users.

The F-150 has been built with the capability to tow a house. For people who are attracted to spending a little more, this is an ideal investment for them.

The Ford Ranger on the other hand satisfies users who need to use it daily because of its small size. Not all trucks are useful but if you are looking for ideal trucks for your errands, the F-150 and Ford Ranger are ideal choices.