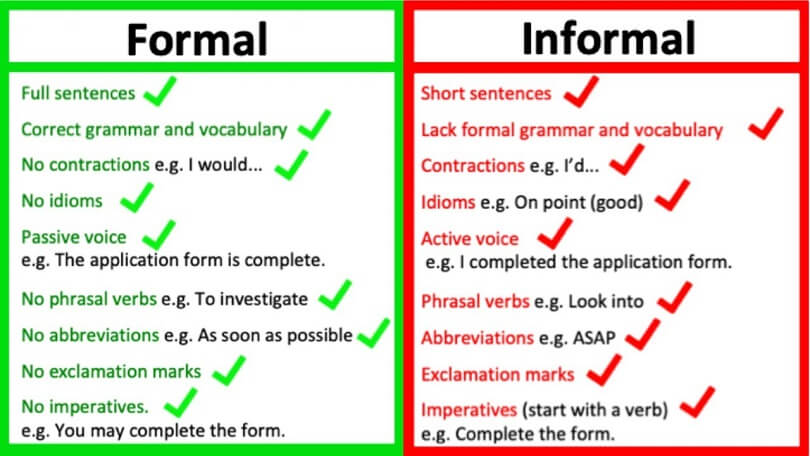 Writing is a useful tool for expressing facts, views, beliefs, and a variety of other things. Formal writing and casual writing are both acceptable modes of communication. Depending on the circumstances of the case and the target audience, formal or casual writing styles are used in the writing process.

However, the aforementioned distinction is not the only one. A comparison of specific metrics between the two words may provide insight on more nuanced features of the situation:

Formal writing, as the term implies, refers to writing that is of a formal character. To put it another way, formal writing is composed in accordance with certain writing guidelines. That is to say, formal writing follows a set of principles that must be followed or maintained in perspective throughout the writing process in order for it to be considered formal writing.

Formal writing is reserved for official occasions. There are many different types of formal purposes, but one of the most typical is a circumstance in which a person is not very friendly with the other person to whom the message is being sent, or when a person is writing to someone in an official role. Formal writing is prevalent in all industries, and certain companies may have strict etiquette on what should and should not be included in formal writing, among other things.

In certain cases, formal writing is regarded difficult to write because of the presence of specific norms, such as the use of appropriate terms, the avoidance of repetition of words, the avoidance of any emotional tone or jargon, and other characteristics of writing.

Formal writing is characterized by the use of lengthy and elaborate sentences, as well as the usage of the passive voice. Furthermore, personal pronouns such as “I,” “we,” “you,” and so on shall not be used in professional writing. Formal writing is widely used for corporate reasons, academic purposes, and any other professional goals, among other things. If formal writing is done correctly, it may express a great deal of respect to the person who will be receiving it.

Informal writing will not have any set guidelines to follow in order to create a conversational atmosphere. Informal writing will be plain and concise in its words and paragraphs. In casual writing, the words may be informally ordered or structured in a variety of ways. If the writing is casual, it is possible that the dialogue will be laced with slang.

Informal writing is typically used for personal, everyday, familiar, or informal communication or discussion. It is also known as conversational writing. If informal writing is not utilized properly, it may even be harmful to the sensibilities of those who are supposed to receive it.

Article writing and essay writing are often confused by the public. This is due to the fact that the word “Essay” is occasionally used to refer to any kind of written production, not only essays. It makes no difference what you write in terms of tone, structure, or style. Its definition may be confused with that of an article, a pamphlet, or a short novella at times.

However, the main difference between an Essay and an Article is that the former is more organized, cohesive, and better researched than the latter. Furthermore, the former conveys the author’s opinions, whilst the later does not.