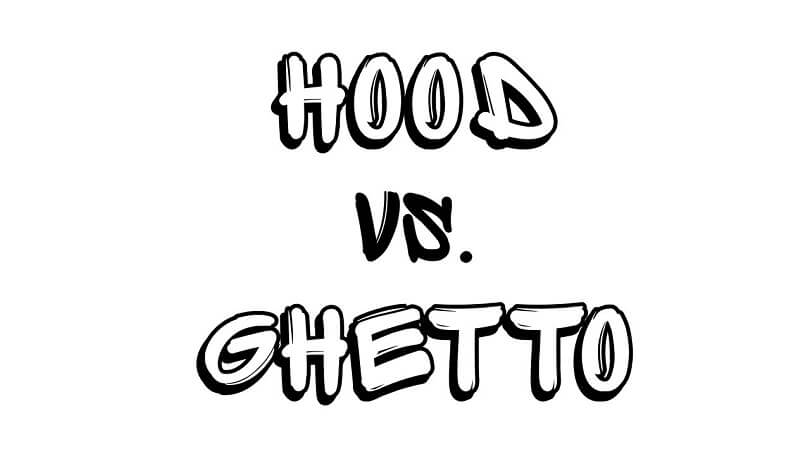 Hood and Ghetto are areas where people reside. Both terminologies are used to refer to residences. However, they differ in meaning. Hood, better known as neighborhood, describes slums or areas where many people live. It is usually a slum or a poverty-stricken area that is within the environs of an urban area.

Ghetto, on the other hand, refers to poverty-stricken rural areas. Traditionally, the hood is described as a place where most people living there are African American. Ghetto refers to urban areas where particular racial, ethnic people are consolidated in modern slang.

The difference between these two residential areas is that a ghetto is defined as a poverty-stricken or slum area that is in a rural area. The area has a majority of minorities or people in the same racial group. On the other hand, a hood is an area in the urban setup where the demographics consist of people who are living in outright poverty.

The name ghetto was derived from Ghet, meaning slag in Venetian and describing deprived or poor living areas. People living there are proven to be struggling in life and maybe illiterate and unemployed. It, however, has a different meaning in modern slang, referring to it as areas where a majority of people residing are of one racial group.

Hood is a short form for the neighborhood. It refers to an area in the urban setup where most people are comprised of African Americans. If you refer to an individual as a hood, it means the said person lives in a certain neighborhood and has some essence of urban culture.

What is a Ghetto?

This terminology was first heard in Venice. It was an area that the Jews community was forcefully restricted to reside in. The word was coined from the Venetian word Ghet, which means slag.

Contrary to the past, a ghetto is defined as an area or a part of an urban setup where the majority of people living there are deprived or poor ethnic minorities. Basically, the word is used to point out the most poverty-stricken area in a demographic.

The words have different meanings in various parts of the world. For one, if you refer to an individual as ghettos, it is considered an insult or derogatory. In ancient times, the people that resided in the ghettos were bad. They were not allowed to exist in the four walls they were enclosed in.

The Jewish community was restricted from the rest of the population. True to its historic beginning, the word has kept its essence. It refers to slums or any dwelling caste of minorities in the rural setup. Just like the way the Jews were made to live a low life, the word is presently used to describe people living in outright poverty and their residential areas. It is slang that refers to trashy, inferior, low-class people.

What is a Hood?

Hood is a short form for the neighborhood. It emerged from a nearing neighborhood of southern Chicago where Blacks were the majority of people living there. Most people confuse the hood with the ghetto, but these two are different from each other. The hood is a slum area that is within an urban setup.

A ghetto can become a hood, but a hood can never be a ghetto. Even though living in the hood can be hard, some people are successful and live classy life there. In slang, the hood is defined as people who reside in a slum and have been to the ghetto. They have the essence of urban culture. They are often thought of in bad light like gangsters or thugs.

It can also be used to comment on a person positively. For instance, if a person has lived in the hood and has known the struggles of being poor but has successfully gotten out of that area. The hood speaks volumes in such instances. The word is not offensive when you compared it with the ghetto. The hood has a high percentage of African Americans living in that area.

Difference Between Ghetto and Hood

The two words (Hood and Ghetto) stem from different regions and refer to poverty-stricken areas of Chicago and Venice, respectively. They are somewhat similar but have minor differences. This sometimes can be confusing to people.

The terms come from different historic backgrounds entirely. They refer to other poverty-stricken areas as mentioned above. The people living there have a struggling life, and some people have fought through the struggle to succeed in life.