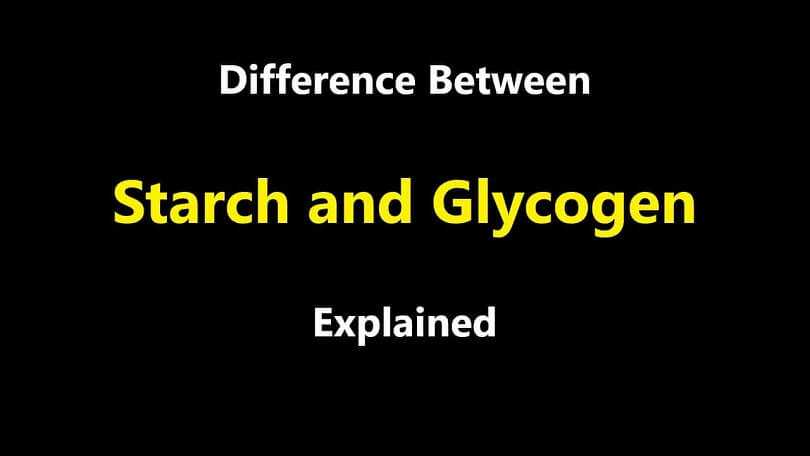 Starch and Glycogen are two glucose polymer polymers found in living cells. The simplest type of sugar is glucose, which is created by plants during the photosynthesis process. Glucose polymerizes to generate complex sugars or carbs such as glycogen and starch. The monomer unit of glucose is bound together by glycosidic linkages during the creation of these polymers.

Glycogen is a vital component of animal and fungal storage and energy production. Alpha glucose is the monomer unit used in the synthesis of glycogen. It is located in the cytoplasm of the cell in the form of tiny granules. Glycogen is deposited in the liver and muscle cells in humans.

Starch is an essential component of plant energy generation. Plants transform the glucose they produce into insoluble storage compounds like starch and lipids. Amyloplasts contain starch, which is the primary nutritional component in many plants and fruits.

Glycogen is a carbohydrate that is only found in animals and plants for energy storage. It’s a polymer made out of alpha glucose, a simple sugar. To create the polymer glycogen, the glucose monomer subunits are bound together by strong glycosidic linkages.

It’s also known as animal starch, and it’s found in the cells of the liver, muscles, and stomach. When the body is low on energy, it saves glucose to deliver it to the body. It has a structure that is identical to amylopectin but is more branching.

When the body wants energy, glycogen is quickly converted into glucose to give the required energy. Glycogenolysis is the name for this process. The hormone glucagon helps to speed up this process.

The following are some key facts concerning glycogen:

In plants, starch is the most important component for energy storage. The polymer is extremely important to plants in terms of energy storage and production. Potatoes,  corn, rice, and other plants are examples of plants that contain a lot of starch.

The combination of two types of molecules, amylopectin, and amylose, results in starch. Amylopectin creates branching chains, whereas Amylose comprises monomer units connected in a linear and coiled shape.

In-plant cells, starch is found in granules called amyloplasts. In plants, starch is transformed to cellulose, which aids in energy production, cell growth, and cell repair.

The following are some key characteristics of starch:

Difference Between Glycogen and Starch

Starch and Glycogenare polymers of alpha glucose, although they differ in several ways. Glycogen is an energy-storing carbohydrate found mostly in mammals and fungus, whereas starch is a carbohydrate group of cells.

Glycogen is a single molecule, but starch is made up of two molecules called amylose and amylopectin. The main distinction between the two names is when they occur. Glycogen can be found in adipose tissues such as body fat and liver cells. It gives the body energy when it is needed.

Plant cells store starch in amyloplasts, and it’s used for a variety of commercial reasons, including the paper and textile industries.