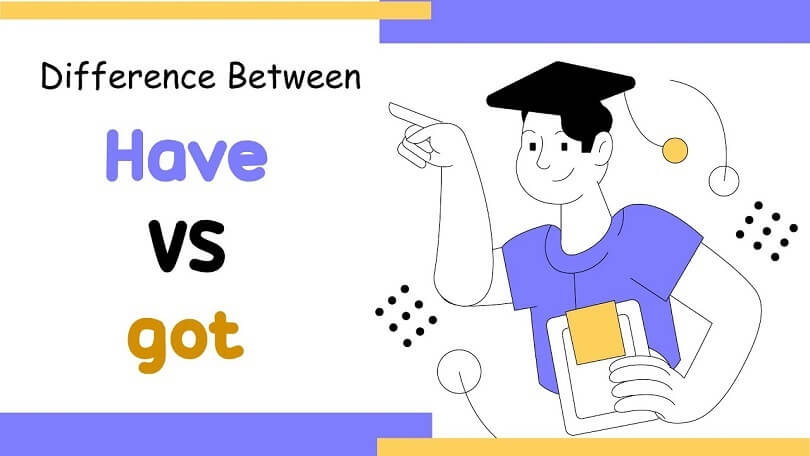 When differentiating between ‘Got’ and ‘Have’, it’s actually distinguishing between their meaning of ‘Have’ and ‘Have Got’. They are used to mean possessiveness when used in a sentence. But as far as individuality is concerned, ‘Got’ is the past tense of ‘Get.’ It has several uses, as discussed in this article.

‘Have,’ on the other hand, is present tense. For instance, when you use it in a sentence like you have a nice pen or you have got a pen. The two-sentence somewhat are similar to each other and are used in the present tense. Even though they are somehow similar, they have some distinguishing factors while in use. Therefore, it is essential to understand the two phrases according to their correct syntax rules.

The distinguishing factors between them stem from meaning and the given situation. The two phrases are very similar in various instances, but their meaning changes when used in the past tense. For example, in the present tense, you can say ‘You have a nice cat’ or ‘You have got a nice cat’. On the other hand, in the past tense, you can never use ‘had’ in place of ‘got’. For instance, you had a friendly chat. You can’t say this sentence as: “You had got a friendly cat“. The correct way to write the sentence is that: “You had gotten a friendly cat“.

The two terms refer to possession, and they can be expressed in various forms. ‘Have’ shows you own something. If you possess something, ‘Have’ will indicate this ownership. For instance, I have a dog. But when you write that I have gotten a dog, it means that you received a dog from someone.

When you try to use these words negatively or interrogatively, there are more common usages than others. For example, “have you got my car keys? No, I haven’t gotten your car keys“. This is an example of an interrogative and negative sentence. It has incorporated the two words together. There are other sentences uncommonly used, but they are correct. For one, “have you any car keys? No, I haven’t any“.

‘Have’ can also refer to actions and experiences. Got or have got can’t be used to refer to actions. For instance, I have brunch at 11.00 AM. Here you can’t use either ‘got’ or ‘have got.’ When you wish to make positive comments, ‘have’ doesn’t have any contracted form, while ‘have got’ can be used in the contracted condition. For instance, I have a pink pen or rather, I’ve got a pink pen.

They mean the same thing when you use them in the present tense. However, their meaning changes when you try using them in the past tense. The word ‘have’ is used mainly by Canadian and American speakers compared to British speakers. The term is also used in a standard setup.

Here are some examples that demonstrate the usage of ‘have’ in a sentence;

‘Got’ and ‘have got’ are words used to try and describe that act of receiving something. You can easily use these words interchangeably in the present tense and replace ‘have.’ You have to note that this replacement is only applicable in the present tense.

When you use them in the past tense, their meaning automatically changes. ‘Have’ will become had and therefore cannot be interchanged with ‘have got’ or ‘had got.’ For example, the sentence “I have got a cat” will change in the past tense to “I had a cat” and not “I got a cat“.

Difference Between Got and Have

Speaking English correctly needs you to have a basic understanding of the grammatical norms of the language. If you do not have in-depth knowledge about this, you will have difficulty writing and speaking English. These two words are confusing to many people when you want to use them.