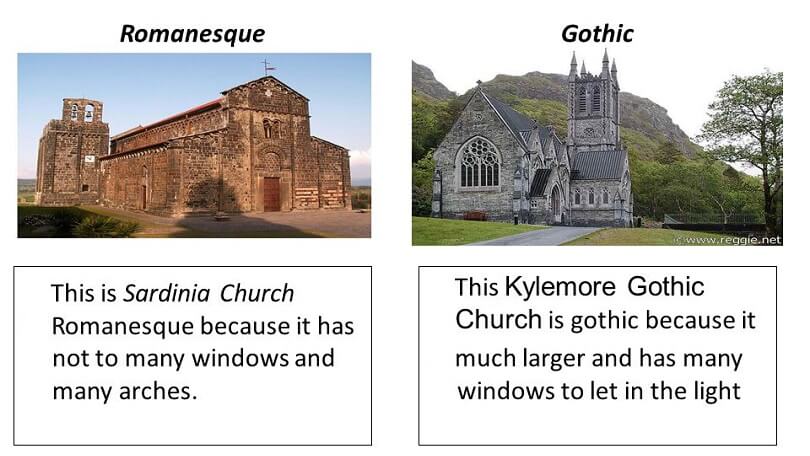 Most people are usually confused when it comes to the differences that exist between Gothic and Romanesque architecture. Well, it’s true that these architectural styles are never the same. However, they still have a few similarities.

The main difference that exists between Romanesque and gothic lies in the fact that Romanesque’s building features unique round arches with blunt towers. Gothic buildings on the same features pointed towers.

Gothic architecture managed to clearly define the different architectural styles and designs that were popular in Europe during the mid-twelve century up to the sixteen century. The gothic architectural building is mainly based on a masonry style. The style is therefore identified through its cavernous spaces that represent broken-up walls expanse through overlaid tracery.

Romanesque architecture can therefore be defined as an architecture or construction method that makes use of semi-circular arches. This style can easily be identified as very common in Europe through its regional characteristics and numerous materials. It is at this period that there was the construction of lots of castles. However, the castle construction could not outdoor the number of churches being built at that period.

What is Gothic Architecture?

Gothic architecture was traced back to the 12th century. This co-construction style was purposely used in building churches.it gave the churches a heavenly look owing to the fact that the building style gives the building a colorful, soaring, and bright appearance. In the past, Gothic Architecture was easily identified through its thick walls and its huge windows. Gothic structures also feature a slender skeleton look with large windows that have stained glasses so that light and easily pass into the room.

One standing feature of gothic structures lies in the fact that the buildings are very tall and also pointed to the sky. The buildings also had ornate round windows named Rose window. Other features that make gothic architecture stand out include vertical lines, highness, and flying buttress. The use of buttresses sets gothic architecture and Romanesque apart. This is because it is famous in every gothic building.

The gothic architectural building approach was a representation of a new construction design that was aesthetically pleasing and also beautiful during its earlier period. However, as time flew by, this building design was conceptualized and the buildings started becoming meaningful and valuable during the middle ages.

What is a Romanesque Architecture?

Romanesque construction style comes to be in the 9th and 12th centuries. The Byzantine and Roman building style was what influenced Roman architecture. The name or term Romanesque started being used in the 1800s owing to the fact that it had the features of barrel vaults. This is the reason the building designs had more similarities to the Roman arch. The Romanesque building also featured blunt towers.

The design of this building featured heavy frames. The architectural design trait also had stones cut precisely and hollow walls were used to evenly distribute the weight of the stones. Generally, the roman arch made it possible for stones to be easily supported within a construction arch center. The window opening of the building style was similar to that of the Romanesque style, meaning they are small. The volt construction is what stood out in this architecture with two different vault styles at the time which included the barrel and tunnel vault.

As the main difference between the term Gothic architecture and Romanesque architecture has been clearly explained, it now becomes easier for many people to have a clear understanding of the meaning and features of these two construction terms. However, they still have lots of similarities that can lead to some confusion.

Since both terms feature lots of similarities, they have been traced from different periods and feature different characteristics which mean they are simply not the same.