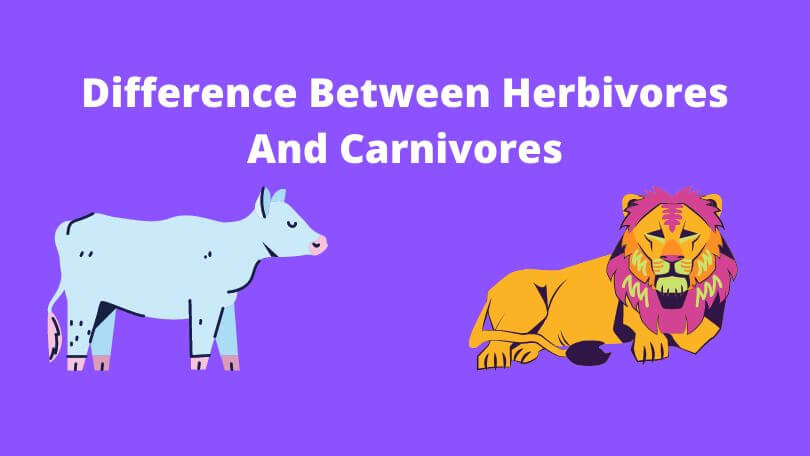 The sort of food consumed by a living organism determines where it falls in the food chain, as we all know. The food chain includes every living thing that relies on some kind of input to stay alive. Humans are at the top of the food chain, followed by omnivores, carnivores, and herbivores.

As far as many people are concerned, the only difference between herbivores and carnivores is the food they consume. However, the food they eat alters their bodily structure and physiology in several different ways to meet their specific nutritional requirements. Do you have any prior acquaintance with them?

Animals that consume herbs or plant components are known as herbivores. Fruits and flowers are eaten by some of them, whereas just green leaves are eaten by others. Vegetables aren’t eaten by every herbivore in the same way. They change their diets depending on their surroundings and the local plants. Elephants, deer, and other herbivores are among examples.

A carnivore is an animal that hunts and kills its prey in order to get its sustenance. They are higher in the food chain than herbivores. As a result, carnivores are more likely to target herbivores as prey. Smaller predators may serve as food for certain larger carnivores. The cheetah, leopard, and other carnivores fall within this category.

The term “herbivore” refers to any animal that consumes plants or plant components. Animals like deer and sheep are common examples.

In order to break down cellulose, which is difficult to digest in plants, they have developed powerful digestive systems and oral enzymes. There are three chambers in the stomachs of certain animals, such as cows

Because they don’t need to utilize their canines very much, they have blunted and flat incisors. For grinding the intake, they also contain powerful grinding teeth. Although their body shape varies depending on where they get their food, all herbivores have weak bodies. Flat and blunt claws are not supposed to be used for hunting by these creatures.

Carnivores are predators that consume the flesh of their victims. Lion, tiger, cheetah, etc. are all examples.

Animals don’t need a robust digestive system or oral enzymes since their meat or flesh is easily digestible. They do, however, have very lengthy intestines — five to six times as long as the animal itself.

These animals have teeth that are bent to help them cut through the flesh. For ripping the flesh off the victim, they have sharp, long, and pointed canines on their front end, and powerful grinding teeth at the rear for totally breaking down the meat,

It is common for them to have a muscular and ferocious appearance since they chase their prey. Carnivores, unlike herbivores, are equipped with long, keen claws for catching prey. The prey they take down includes both herbivores and smaller carnivores, depending on the species.

Difference Between Herbivores and Carnivores

Many sorts of intakes are required for the existence of various creatures across the earth. The term “organisms” may refer to everything from plants to bacteria to ants and even elephants. Humans are at the top of the food chain, which is determined by the sort of food they consume.

Plant-eating animals are known as “herbivores” because they consume plants and their components. Their digestive systems are stronger and an enzyme in their mouth helps start digestion since their cellulose is difficult to break down and digest.

A carnivore, such as a deer, hunts and kills its victim while it is still alive for food. Their lengthy gut compensates for the lack of enzymes in their mouth due to the nature of their meat and the ease with which it is digested. Most of the time, they hunt and kill herbivores as well as smaller carnivores.

While predators have powerful teeth for crushing meat, herbivores have sharp and flat incisors for slicing through foliage and fruits. Carnivores, on the other hand, have canines that are long and sharp enough to rip through the flesh with brute force.